When the Christmas carols were already sang, your New Year resolutions already prepared, when your web design templates and your projects are behind in the old year 2016, you may think: “What else do I need to be fully prepared for a New Year 2017?”

The evergreen classics says it should be web design freebies, and we offer a free desktop calendar 2017! Apart from the fact that it is free and you may use it on your desktop, it has some predictions for you. The predictions will be told to you by 8 adorable monsters, which belong to a TemplateMonster family.

Do you think that these 8 monsters are strangers and you wouldn’t want any strangers on your desktop?

Let me introduce them to you, and they won’t be strangers anymore 🙂 Moreover, after meeting them you would love to get the calendar.

Warning! Any resemblances to actual persons, living or dead, are purely coincidental. 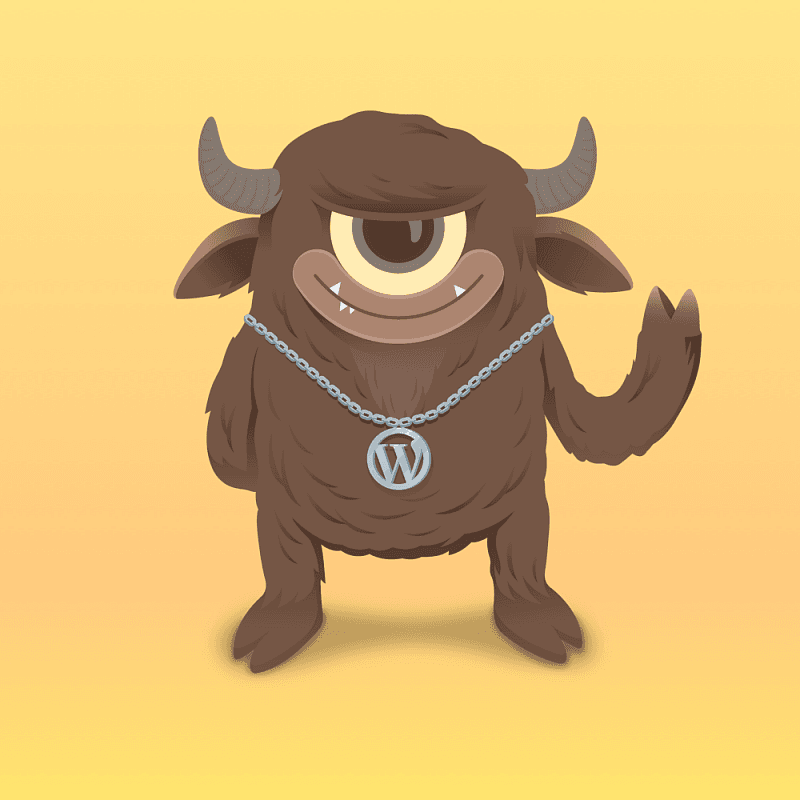 Matt is a mix of a radioactive goat and a unicorn, and he became a WordPress mascot. Since his childhood, he differed from his peers, so he had to acquire some outstanding talents in order to be different in a good way. As a result, he became a proficient rapper, who likes sophisticated heavy jewelry. He believes in Open Source.

He's mostly self-employed, and he has already created several incredibly successful companies and projects related to development. Another firm belief that he has is the idea that lean-development is more than just cool.

In 2012, he got to the Forbes Top-50 Most Influencing Capricorn Investors. On the whole, he’s a good man, who’s purchasing his own Capricorn dreams.

Matt will be with you in September. 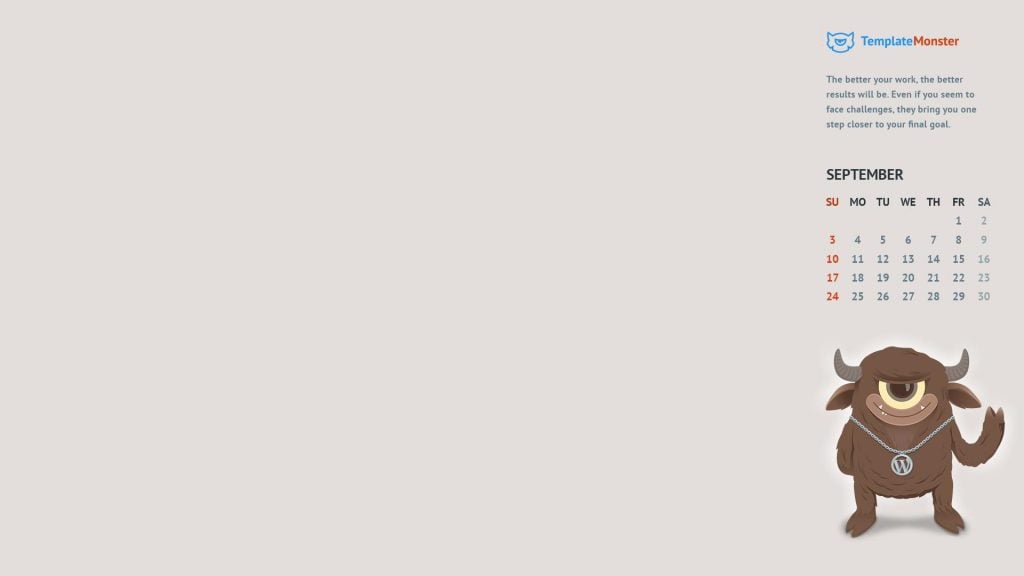 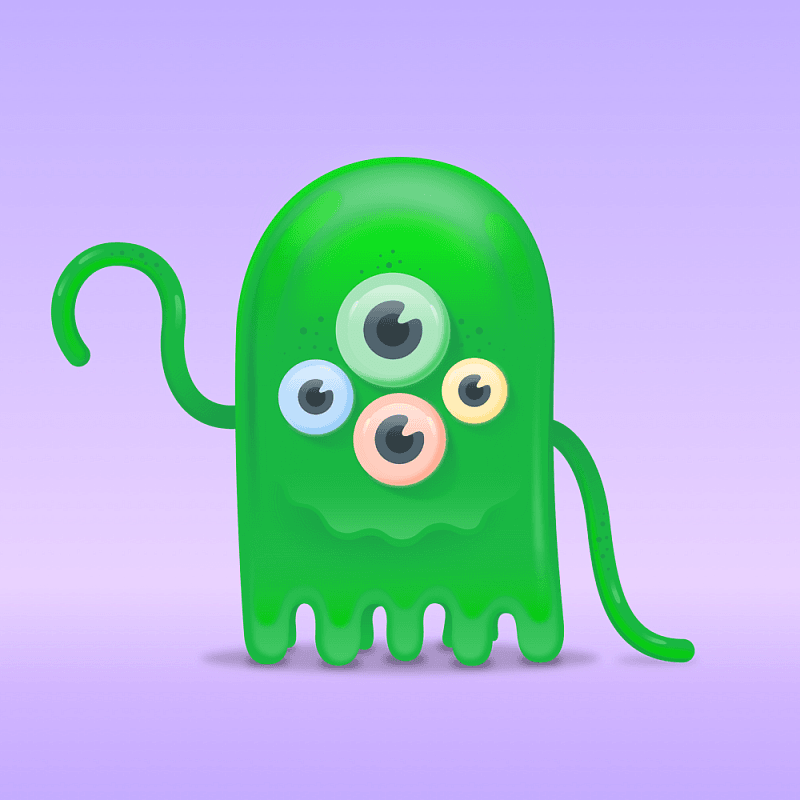 Ubla is a girl (although we are not 100% sure) who is a Joomla mascot. Ubla all the time forgets where she is and communicates using some weird sounds. Ubla looks like a jelly-like poisonously-green substance, presumably of an alien origin.

She can adapt to any shape, and crazily quakes from the slightest wind blow. Ubla has 4 eyes which don’t see anything and no ears, although her hearing is perfect. She may be concealing some kind of a sonar inside, otherwise, her hearing would be inexplicable.

She accidentally appeared in a Monster family, and no one knows where she came from. She claims to be several thousand years and to be remarkably wise, but no one believes her.

Ubla agreed to represent June on your desktop. 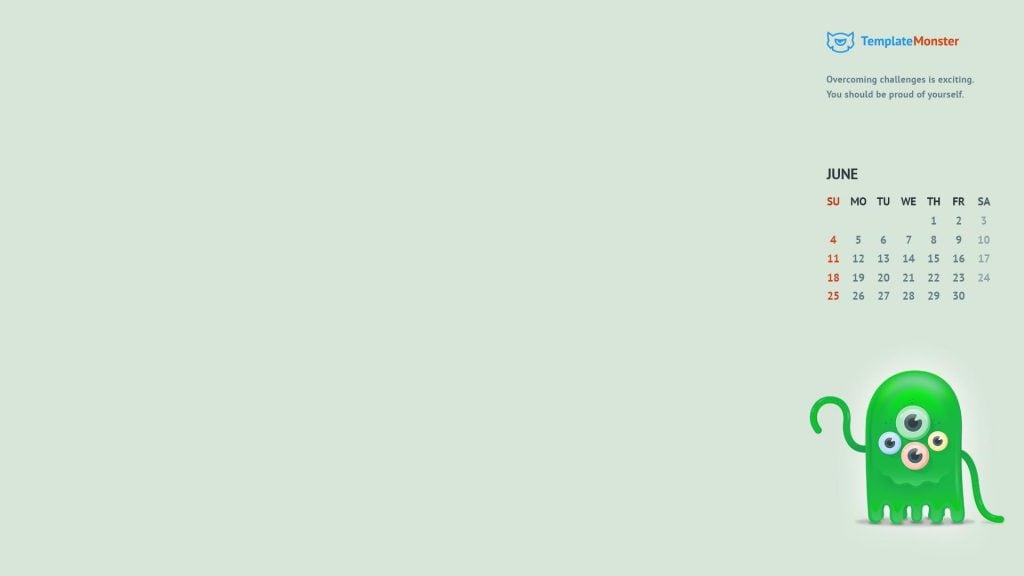 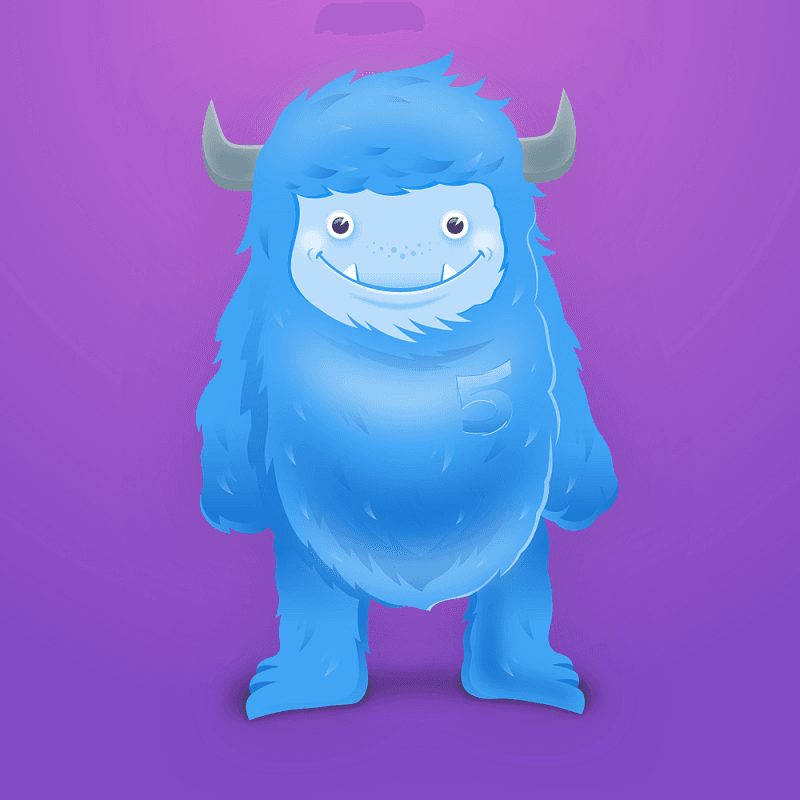 Zilla is an HTML mascot. He’s an outstanding madcap who keeps playing unfunny jokes on others. He has a British accent, although his teeth bite makes the pronunciation so unclear that, in addition to accent, it makes a flow of unclear speech.

At his free time, he likes scaring people in the woods and mountains, pretending to be Yeti. If you have heard someone evidence he had seen Yeti, now you know whom he had actually seen.

Zilla has a difficult, but cheerful nature. He’s incredibly loyal to his friends but very unpredictable towards strangers. In summer he’s shedding a terrible amount of fur, so in order to prevent TemplateMonster office get covered with a thick layer of fur, the TemplateMonster family buys him a ticket to some Northern countries.

He claims to have graduated from Oxford, but it’s still unclear how come he had never been seen there. Anyway, he is brilliant at physics and mathematics.

Some people say he participated in the process of creating the first computers, but this is quite unlikely.

After a long and tiresome conversation, Zilla agreed to be depicted on two wallpapers, January and October calendars. 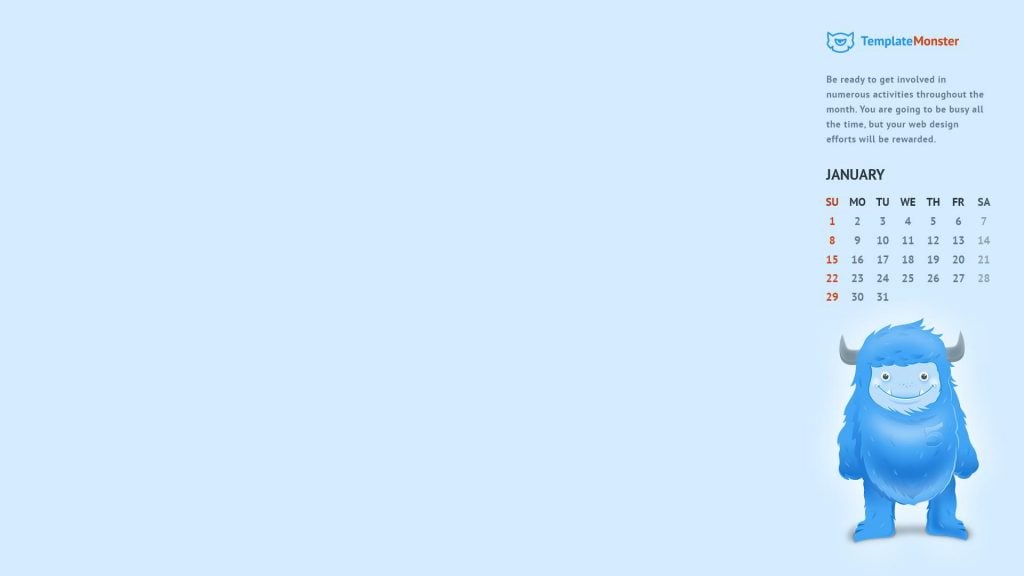 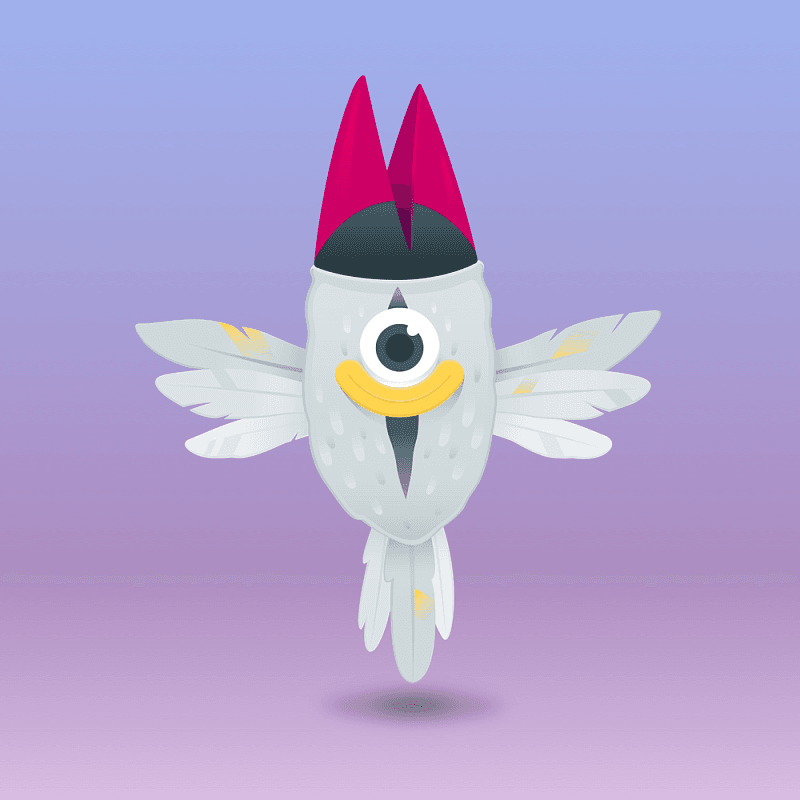 Having a weird look, this bird attracts customers and business partners with her bright and incredibly out-of-place beak. Cara is a PrestaShop mascot, she adores karaoke, although those near her when she’s singing would rather prefer being elsewhere.

She’s not a Phoenix, but that doesn’t prevent her from reborn, with different modifications each time. This bird believes to be wit and smart, but… well, let’s not ruin her illusion.

They say she is of Spanish origin, although she covers her birth up. She’s been friends with Matt, a radioactive a half-goat and a half-unicorn, for a long time. Nobody knows how she can fly with her small wings, but she can. Supposedly, she has some advanced flying technology, brought from the future.

Cara doesn't even know that she'll be on your desktop in May. 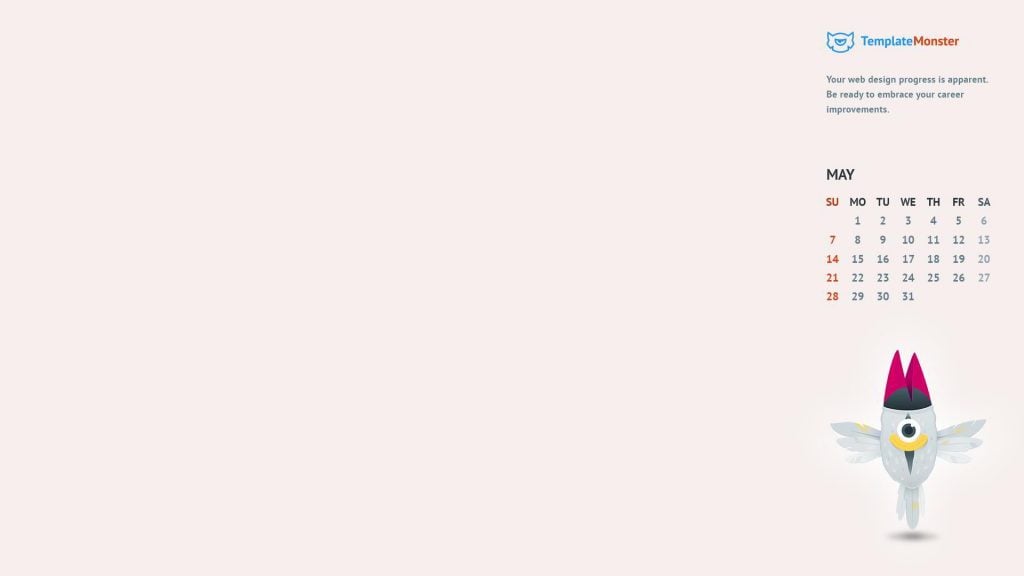 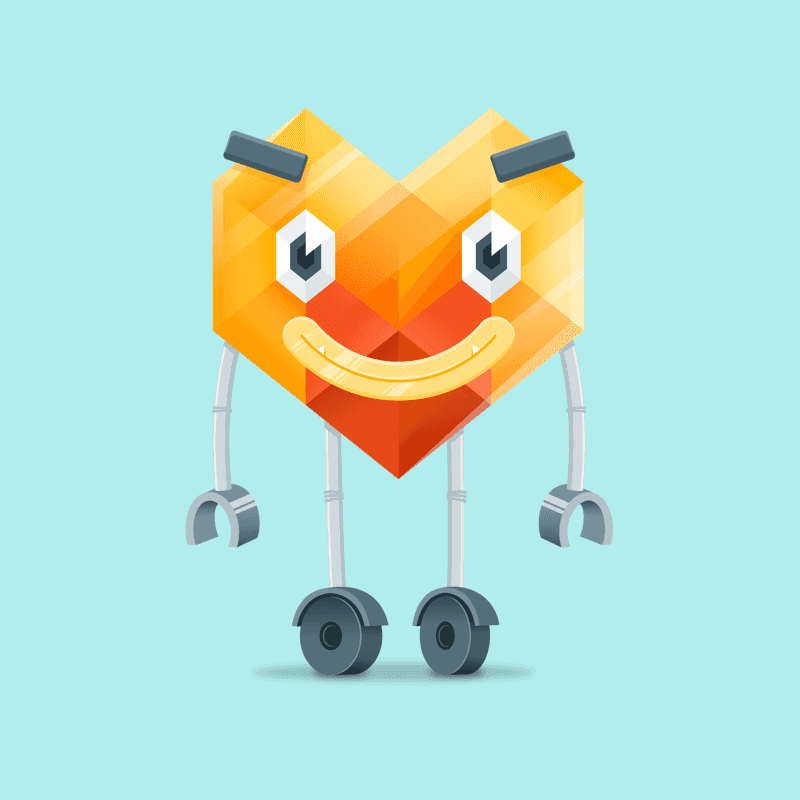 Deme-3-0 was created in a secret laboratory in Nevada. Nobody knows how and why he was created (keep in mind that lab was secret). By some strange coincidence, he was transported to TemplateMonster, where he became a MotoCMS mascot. This event surprised both him and TemplateMonster team at first, but later on, he joined the Monster Family and they have lived happily ever after.

Deme-3-0 has an excellent sense of humor and adores laughing in a company. God forbid laugh at him, though - the person who does that will experience his friendly heavy-metal-leg punch. Also, he speaks several languages fluently (especially Latin), so most of the time web template developers contact him for a neat “Lorem Ipsum” text.

Deme-3-0 seems to be fragile, but this is far from the truth - he’s made of stout sapphire. He’s a perfect runner, he can run a marathon without even sweating. Oh, he’s a robot, right. Deme chose August calendar. He claims that predictions made in August come true. 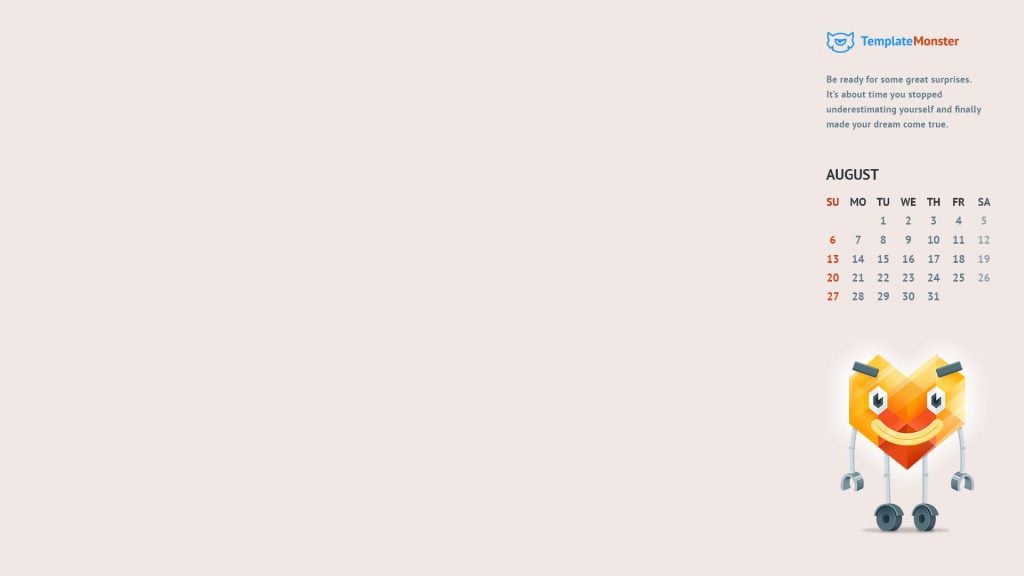 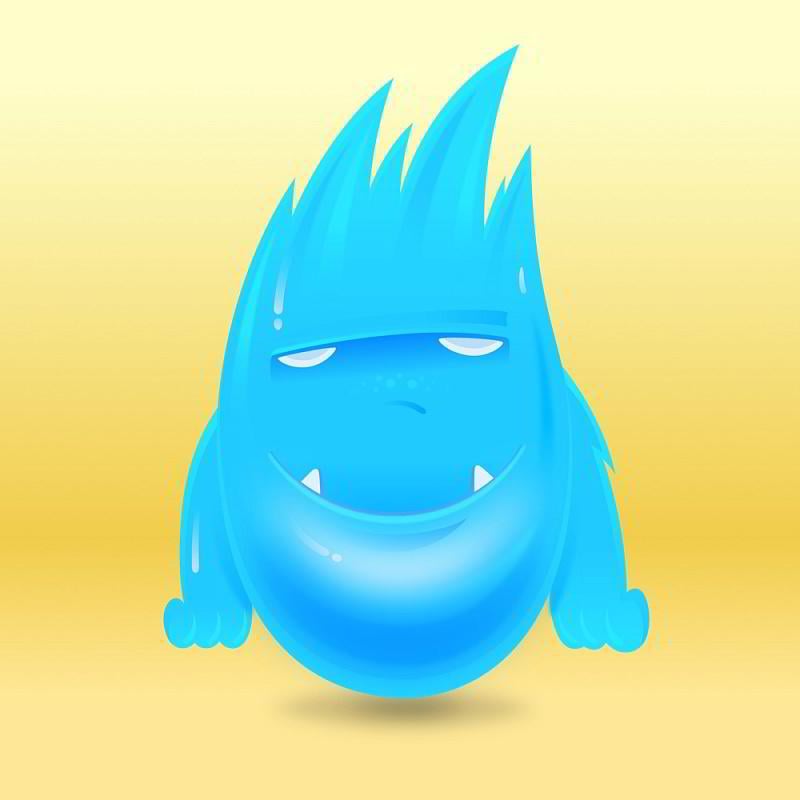 Dro is an OpenCart mascot. He’s sometimes confused with a forgotten Drupal mascot, which freaks him out. Most of the time he looks phlegmatic and grim. Well… he doesn’t look like that, he is like that. He also makes a bubbling sound when he speaks. Dro considers Waz and Chan to be his personal enemies, and he always finds the reasons to envy them. He had been away for 9 years, but no one knows where, why and what he did there.

When we asked Dro which month he'd prefer to represent in our calendar, he said he'd want February. The month which is as fierce as his nature. 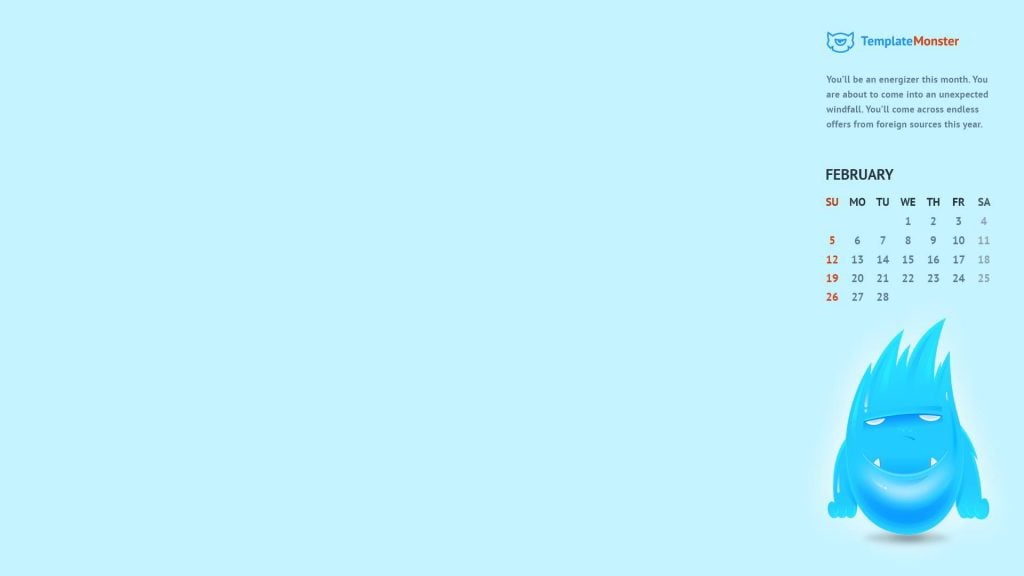 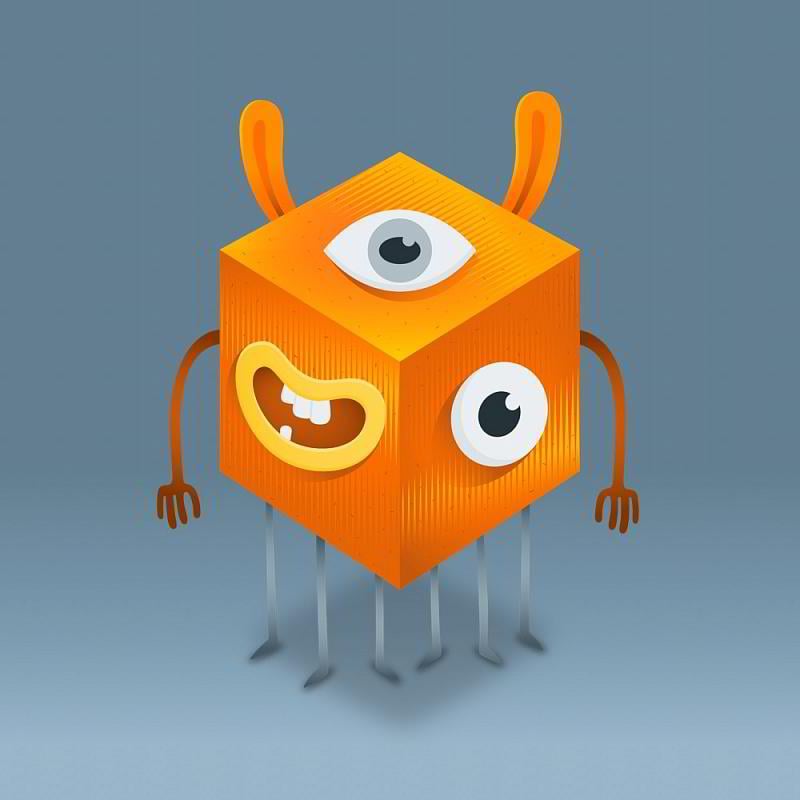 Waz looks like a small rubbed to a shine square-shaped chest which has quite a number of thin legs. Thanks to them, he’s able to be a Magento mascot and move with a lightening speed, but he rarely does that. Most of the time, he’s calm. He’s famous for his having everything that you may need - starting from a pencil sharpener to a spare rocket engine. How he manages to hide it inside stays secret. Apparently, he has hyperspace inside, no one can tell for sure.

Sometimes he fancies teleportation, but he knows how much it irritates those around him, so he doesn’t do that often. He is said to travel between the worlds, which would explain how he gathered the weirdest collection of inter-world artifacts.

He doesn’t talk, he communicates either with telepathy, or he doesn’t communicate with you at all. Apart from all that, he’s a typical monster.

Waz said he didn't care which months to represent in the calendar, so we put him in August and September. Sure things, he didn't agree to that, so we replaced him to April and November. 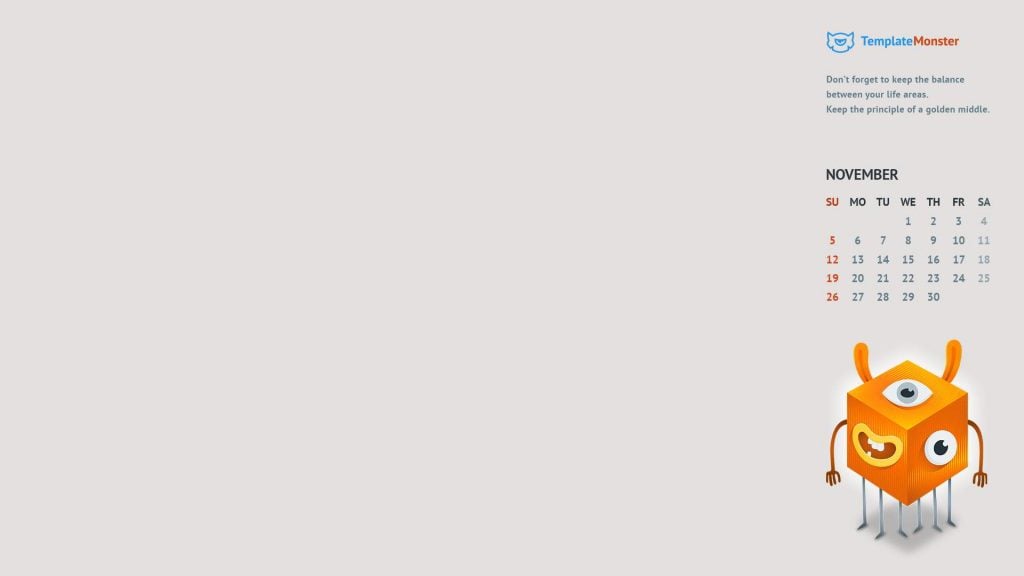 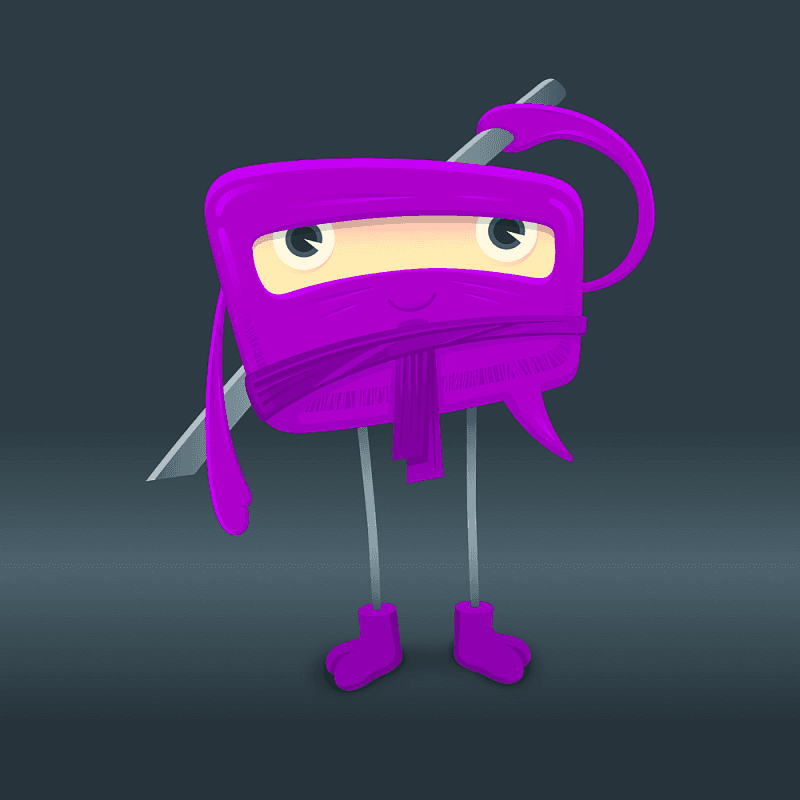 No information is available about Chan, except for he’s a WooCommerce mascot. We’re not even sure his name is Chan.

Chan said that calendar represents time, and time is relative, so he wasn't going to take part in this business. This is why we placed him on 2 desktop wallpapers - for March and July. 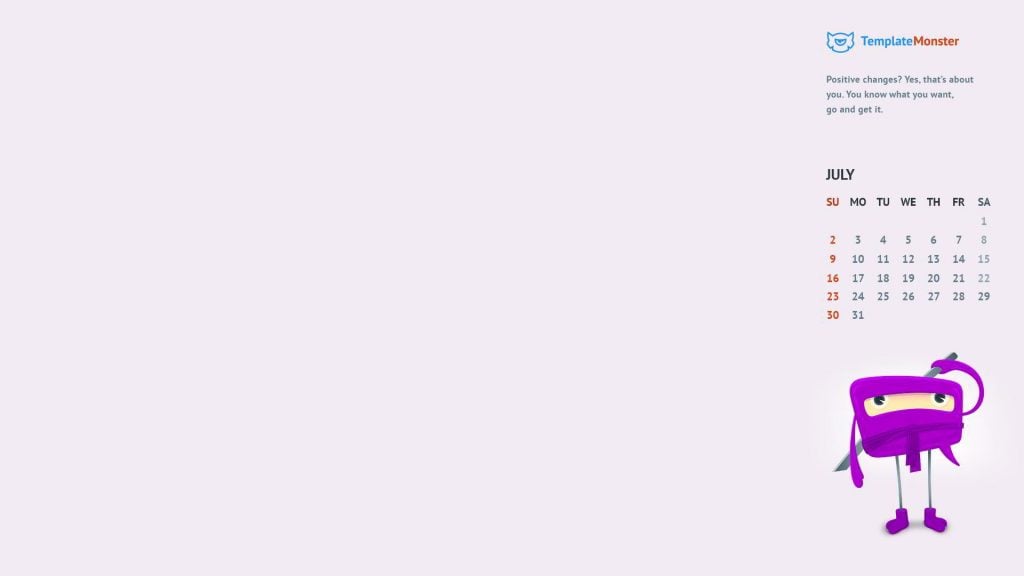 Well, now that you know every member of our Monster family, you may freely download the free calendar 2017! These monsters will give you some advice. They are good advisors.

P.S. If you know any monster who likes web design, please send this post to him. Cara, Chan, Matt, Dro, Wazz, Ubla, Zilla and Deme-3-0 will gladly accept one more member to their family.

I like putting things in order and sorting stuff to make it easier to find something useful. That's why I like creating template listings. Besides that, I do researches on different interesting topics on web design and seek topics that could inspire readers. LinkedIn