2016 Rio Summer Olympics starts today. While you’re bracing yourself for the most prominent sports event ever, MonsterPost reminds you about the five greatest Olympians in the history of the Games.

I'm sure their examples will inspire everybody. Don't forget to tell about your favorite Olympian in the comments below. Also, for those who are inspired enough to launch a sports blog or website, here are five best themes where every athlete will feel right at home.

When I’ve just started collecting the data for this article, I asked everybody around whom I should mention in it. Names differed, but everybody mentioned a Jamaican athlete — Usain “Lightning” Bolt. Probably, you’ve also heard a thing or two about the fastest man in the world who’s set eight world records (beating his own records from time to time).

Today, Usain Bolt is a holder of both 100m and 200m records, which makes him one of a kind. Ethan Siegel, a theoretical astrophysicist, calculated that Bolt has reached the physical strength of people who will be living 30 years from now. Here’s a true story of a time jump, or more accurately, a time run.

Now, let’s take a look at Mr. Bolt’s setting his world record on the 2008 Olympics 100m final. There was no favorable wind, his shoelace was untied and, he was so happy finishing first that he started celebrating before crossing the finish line. He ran 100 meters in 9.69s. According to Usain' coach, the sprinter could've scored 9.52s if he hadn't wasted precious time before the finish.

When I was 14, I used to dream about seeing the Eiffel Tower someday. Do you know how Nadia Comaneci, a Romanian gymnast, has spent her 14th year? She performed the flawless routine on the uneven bars at the 1976 Montreal Summer Olympics. By flawless I mean that she scored a perfect ten for it. What's more, she became the first gymnast in the modern Olympics to do so.

As a matter of fact, a perfect 10.00 was considered impossible at that time. For that reason, the scoreboards had only 3 digits, so when Nadia Comaneci performed her routine, the jury confused the audience by showing 1.00 instead of 10.00. Only when everybody realised what this score really meant, they burst into ovation. And so the young sportswoman made it into history books as the first one to score a perfect 10.00 and the youngest Olympic gymnastics all-around champion.

Aside from his obvious talent for the sport, Jesse Owens is famous for coming to 1936 Berlin Summer Olympics, winning 4 gold medals there, and showing everybody that it takes one African-American athlete to prove Hitler’s racial “theories” wrong. That’s what I call badassery of the year.

In a nutshell, during 1936 Summer Olympics in Berlin, the general Nazi plan was to show the “Aryan racial superiority”. Didn’t happen. Though Mr. Owen was bullied in Berlin a lot, he managed to win the 100m sprint, the 200m sprint, the 4x100 sprint, and the long jump. Four golden medals for the US and one humiliated dictator, that’s the way it works.

It would be unfair not to praise his other achievements, as he managed to set three world records in less than an hour at the 1935 Big Ben Track. Now, here’s his famous 100m run, just look at how talented he is.

For me, a person who simply can’t swim (yes, I really can’t), this guy looks like a real-life Aquaman. Michael Phelps looks like he was built to be the most successful swimmer in the world. Phelps’ arm span is 6 feet 7 inches which is 3 inches longer than his height and his torso (which is kind of unusual if you compare it to an average person’s proportions).

In practice, it means that Michael Phelps is the most decorated Olympian in the world with 22 medals. He holds 7 world records in swimming and the all-time record for Olympic gold medals (18). Okay, this can go on forever. In a nutshell, he’s set a lot of records, and then made a lot of new ones.

Here’s one of his latest, set at 2008 Beijing Summer Olympics — a 200m butterfly. As for today, this record has been beaten by… Michael Phelps. Yes, the hardest competition is the one with yourself.

During his sports career, Carl Lewis showed unbelievable results and set quite a few world records. One of them is still unbeaten since 1984 — the indoor long jump. One of the most prominent track and field athletes, he won 10 Olympic medals, nine of them gold.

International Olympic Committee considers Carl Lewis “sportsman of the century” and he definitely is one of the most talented athletes out there. One Olympic gold requires a lot of work and persistence. Now imagine a person who managed to win 4 golds for long jumps at 4 Olympics in a row. Not only did he that, he also beat different records in 100m and 200m sprints and long jumps.

Are you feeling inspired already? So it is exactly high time to start working out. Also, don’t forget to take a look at Rio 2016 Olympics. And in between — as long as all sports fans need a place to share their enthusiasm with like-minded people — create your own sports website. Here is our selection of 5 inspiring website templates about sports and outdoors. Choose one and get yourself going. 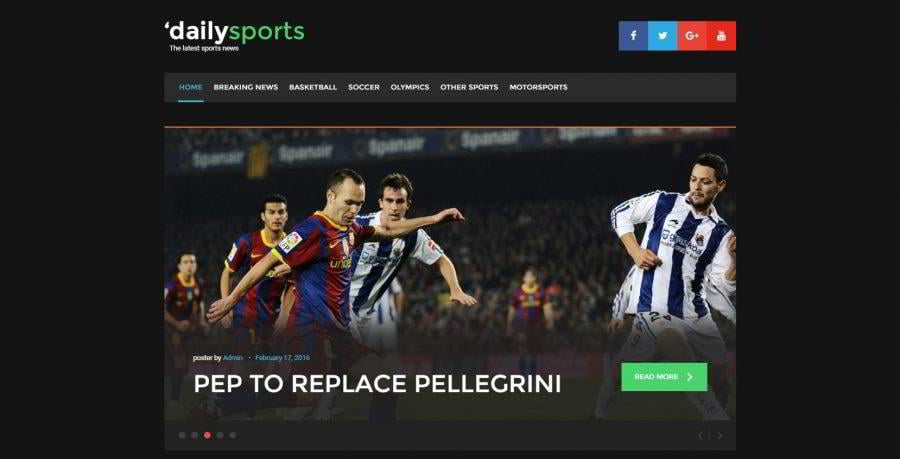 This WordPress-powered, Retina-ready and 100% responsive template is a great option in case you’re looking for a high-octane, dynamic layout for your sports blog. A grid-based structure of DailySports means that your posts stay on the main page longer and it looks better, too. Prominent social media buttons will help your readers share what they think — both on desktop and mobile.

Prominent social media buttons will help your readers share what they think — both on desktop and mobile. 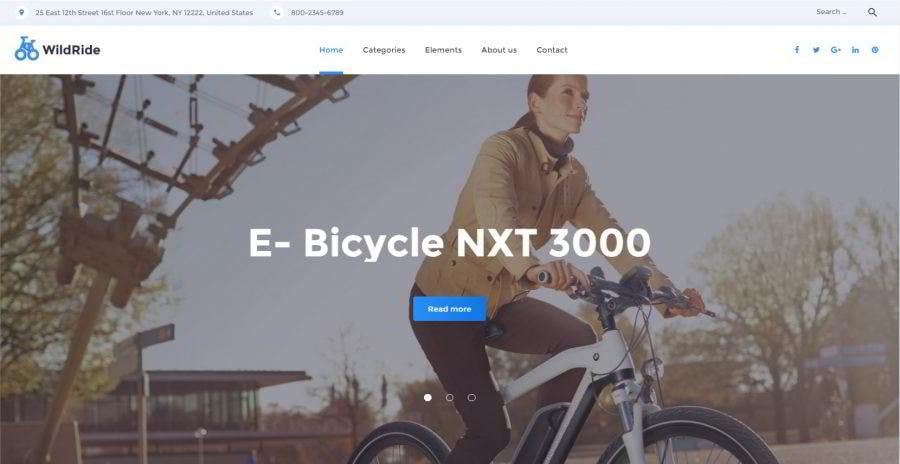 What would you say about a trendy minimalistic WP theme that looks great on any device and is refreshingly unbloated? The WildRide WordPress template is one of the biggest hits of this summer and it’s easy to see why. Its simple layout with a lot of free space, a huge image at the top and unconventional design approach makes for a memorable and instantly recognizable look.

Its simple layout with a lot of free space, a huge image at the top and unconventional design approach makes for a memorable and instantly recognizable look. 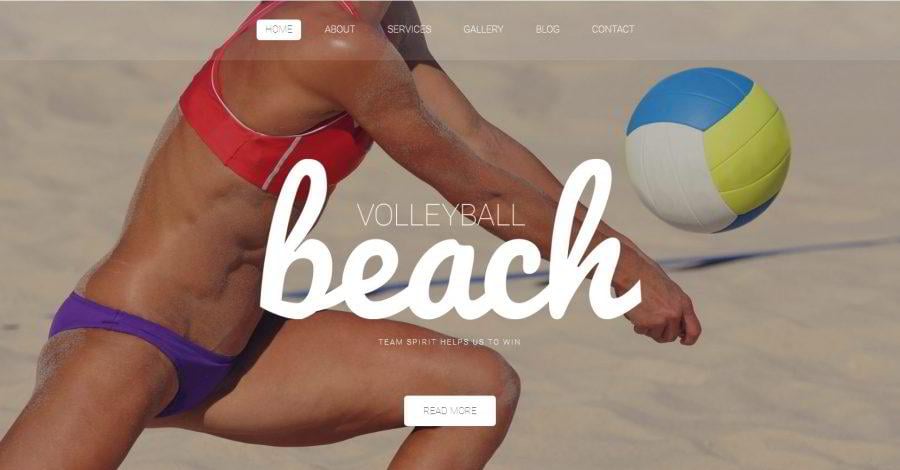 People like websites that are able to inspire them and inject some optimism into their routines. This WordPress template is just that: a splendid design full of rich animations and crisp photography that breathes summerly lightness, improvisation, and fun. 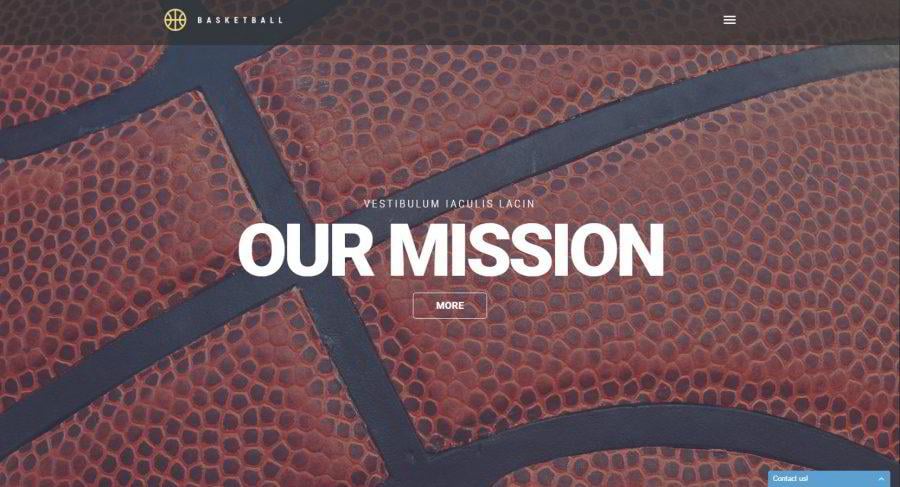 If you’re launching or relaunching a website on basketball or any other popular sport, consider treating yourself with an elegant WordPress theme that highlights the beauty of the game without any of the gaudy colors and typography so often found in sports websites. Instead, your next basketball page will look like an excerpt from a popular magazine. 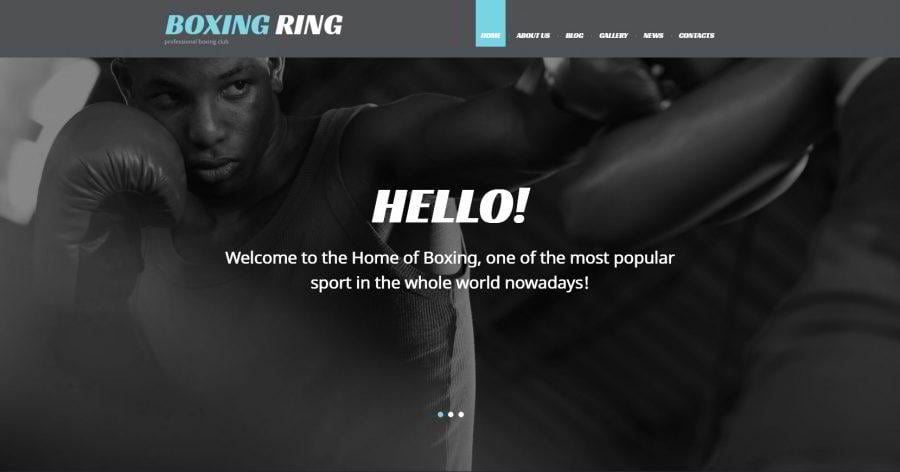 This WP layout is the real deal. It pulses with energy, but the energy is restrained behind a classy all-gray background: what you’re left with doesn’t look like your usual website. Instead, it’s boxing-as-art approach makes for a fashionable experience, one that is not easy to forget. And do pay attention to the gloriously smooth animations of the logos corresponding to each section of your website.

Instead, it’s boxing-as-art approach makes for a fashionable experience, one that is not easy to forget. And do pay attention to the gloriously smooth animations of the logos corresponding to each section of your website.

After all, the Olympics are not about medals, they are about winning over your own self. That is why there are so many inspiring stories of sportsmen who didn’t win but showed something even more important — their mental strength.

At the 1960 Rome Olympics, an Ethiopian athlete Abebe Bikila won a marathon gold medal. He won it while running all that distance barefoot. The reason being is that his pair of shoes was uncomfortable, so he decided to run barefoot... And he won!

You can make your dreams come true no matter what. You can run a marathon barefoot, you can build your website from zero and you can reach your fullest potential as long as you stand for it. So, stand up, create your own challenge, and win.

P.S. Who is your favorite athlete or a role model — as far as Olympians are concerned? Did you ever break a personal record of some sort? Share your experience in comments!