Adobe has made another huge step forward towards the great and powerful HTML5 technology by releasing the public preview of Adobe Edge tool (which by the way you can already download from Adobe labs).

As it has been said, Adobe offers a preview of this new software so you could take part in the process of debugging and improving Edge by sending the Edge team your feedback concerning the brand new product. The real fun part is that this is basically the last hope of Adobe in terms of not losing the web animation battle. That's why it matters so much to all of us.

Adobe Edge is the web motion and designing tool that creates animated content with the help of open source standards such as HTML5, CSS3 and Javascript programming language. It is obvious that with the release of Edge Adobe moves towards the mobile devices which are currently the sweetest piece of the web market pie. It seemes that Adobe decided to remind us all thar they are not only famous for Flash, but if you think that Edge is going to replace Flash I guess it is not quite right. Well, at least it won't happen in the nearest future. It is just an additional software for mobile developers that may be a part of a powerful tandem with other tools. Also don't forget about Wallaby project - Flash to HTML5 converter from Adobe, it still remains one of Adobe's priority directions and can be considered a software complimentary to Edge and Flash. 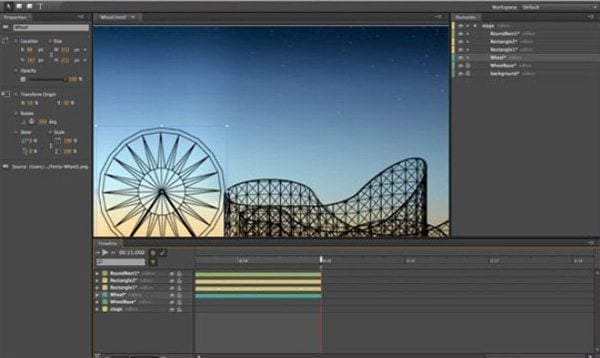 SVG, Canvas and Other Goodies

As you may have noticed, Adobe Edge is so far in the preview mode and there are many important milestones ahead. So, now Adobe's developers are working on improvement of the SVG support (not only file import option). Also we are waiting for a canvas implementation because so far all animations are based on div and CSS. According to the Adobe's developers, canvas shows poor performance in major mobile browsers but it will be implemented in the final release for sure. So things look pretty promising.

Well, Edge is in the early beta right now, but even in this status it is a very promising editor with a huge potential. In case you're interested (and in our opinion this is definitely worth being interested in) you should definitely try this new product from Adobe - chances are it is the future of mobile web development.

What do you think about Adobe Edge? Did you try the beta yet? Do you believe it will become the replacement of Flash editor? Will it save Adobe from the oblivion on mobile segment? Please be sure to let us know your thoughts in the comments section.

How to Render in After Effects? A few Useful Tips About Rendering

How to Create QR Code for a Website – Increase Your Online Presence Effortlessly!

6 responses to “Introduction to Edge – Adobe Now Secure from Oblivion?”