Find Solutions for Your Art Projects with a Collection of Medieval Fonts. Best 20 Gothic Fonts

Medieval Fonts. Looking for fresh ideas to give your projects a hot look? Well, you are on the right website. Here you will find a number of Medieval and Celtic fonts that can add some style to your artwork.

So let’s start from the top. Medieval or Gothic fonts are probably the oldest ones. They were developed in 12th century and ever since they have been used in typography. Many people are sure that they worked mostly for religious and historic texts but that’s not quite right as there is a variety of books on science, law and grammar created using the Medieval script.

Today, Medieval fonts are associated with mystics, vampires and stuff like that. They are used not only to give the projects a dark look but are also quite popular in typography, web-design and video games when you need to create a magical atmosphere or give the text a fairy-tale look. You can easily find a number of free Medieval typography samples on the Internet.

There is another script that is pretty popular nowadays – Celtic font. Generally speaking, it is quite similar to the Medieval, but it is associated with the Vikings and is basically used for Celtic knots and signs. It is a somewhat of a trend in the tattoo world; there are lots of people who get themselves inked with Celtic signs or words written with Gothic font. Anise Seeds font is based on old methods of drawing letters for books. This font is unique and suitable for projects related to the Middle Ages. It can be stylish signs from quest rooms, advertisements, thematic shops with historical items and the like. There are two font styles available: textured rough and smooth clean. This stylish medieval font includes a set of wide letters. They come in 2 formats. Goodwine looks luxurious because each letter is neatly drawn. In addition, each sign includes a slight shadow. This is what gives the effect of a mystery of old times. The Far Kingdoms Font is suitable for extraordinary projects where text must be visible and stand out from the crowd. This font resembles the times of medieval kings, because it looks also majestic. The uniqueness is that each letter includes different notches, cuts that create the effect of wood-cut letters. If you are looking for a cool font for the site then Droptune is ideal choice. The font comes in 2 main formats, namely OTF and WOFF. It will look great for signs of historical shops, book clubs, themed quest rooms, sites for entertainment and the like. The symbols are included to help you complete any project and surprise the audience. Odd Times is characterized by minimalism, seriousness and elegance. It is quite easy to read, but at the same time it is unusual, because it resembles the Middle Ages. So if you want to create a celtic atmosphere, then Odd Times is just for you. This font can be the ideal additional font, and it can attract the audience's attention by making you stand out from the competition. This example of medieval font is simple in understanding and perception. It is this factor that makes it popular. Red bold letters include light abrasions along the contour of the letters. And it looks great. Rusted Bevel comes in 2 available formats, with 3 files in each one. With a large number of characters, you can create all kinds of inscriptions with various symbols. Column is a medieval font inspired by old columns. The peculiarity is that each letter consists of columns of different size and type. Different curls at the ends of the letters, and cutouts look very elegant. Column font will be a great option for books, presentations, and websites. This font will definitely be the highlight of any of your projects. Golden Dust is an unusual font with golden letters and curls at the ends. The curls are like the snake tongue. And it gives a certain mystery to the font. With a trend towards gold colors and unusual font shapes, Golden Dust attracts the attention of all without exception. This is probably the most unusual and beautiful medieval font which comes in two formats: OTF and TTF. Interesting font shapes encourage you to create stylish typography. Each letter includes curls and thin stripes. This creates a carved wood effect. You can use this font to create awesome logos, ads, and promotional materials. Another cool creature from Gleb Guralnyk. He is a popular author on TemplateMonster, who has created many original fonts. And Letterhead is one of them. Carefully drawn letters are easy to read and look confident. With such medieval fonts you can create a special atmosphere on your website. Or you can make eye-catching headlines. Letterhead works well with more standard fonts. And such a pitch will surely be a win. 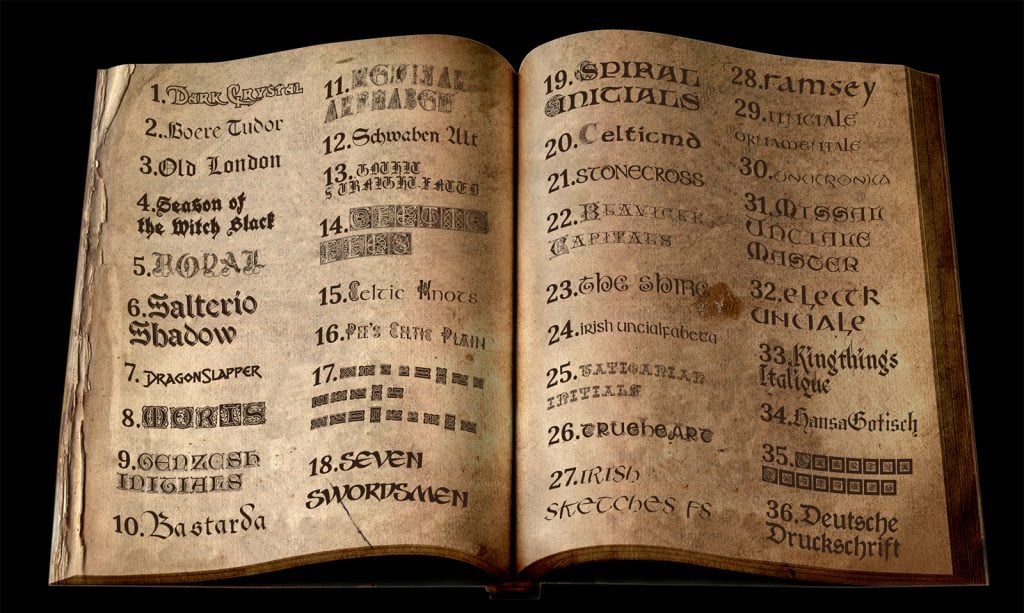 In this package of free Gothic fonts you will surely find something special. Take your time and try them all to add new style to any project.

This is a bold and confident font for eye-catching headlines. Its peculiarity is the letters that end abruptly, as if they were expected to continue. Viking is a stylish font with letters that look like royalty. This medieval font can be used for high quality products. Viking will help give the project courage and assurance.

Unique medieval font from Pawel Burgiel. Longa Iberica is distinguished by its thin, strict letters and curls on some signs. This gives the font just the right sophistication and aristocracy. Longa Iberica is perfect for thematic projects, presentations, and websites.

Odin Spear is a font inspired by German-Scandinavian mythology. The font includes 2 files. Namely a bold black font, and contoured letters. The main feature of the font are symbols consisting of smooth lines. It looks unusual and inspires bright ideas. Odin Spear is a bit like hieroglyphs and carved signs.

This Medieval Scribish is one of the best fonts in that it creates eye-catching logos and banners. Each letter is neatly drawn, and differs by changes in style. For example, some symbols include thin and bold graceful lines. Medieval Scribish is popular because despite its wide, bold and merged letters, it can be easily read.

This is a bold font with thin lines that continue some letters. Holy Bible is perfectly readable, so it is suitable for large logos, website inscriptions and book titles. This medieval font comes in 2 files. You can also find many additional symbols in the set, which help to create a quality typography.

DeRoos Caps was inspired by the combination of the Middle Ages and whimsicality.

Many popular fonts do not give such a mysterious effect as this one. The main purpose of this font is to bring medieval motifs, and add extra sophistication to projects. DeRoos Caps is great for posters, logos, book titles, stylish prints, and historical sites.

This is an original medieval font that impresses with its appearance. Celtasmigoria includes 2 styles. The first one is large letters with ornamental filling and thin contour. The second style is more original. Its main feature is the letters consisting of medieval objects. These are snakes, candlesticks, whimsical figures and bindings. Celtasmigoria is ideal for your cool projects.

Celtic is an original font from Giovanni Landi. The uniqueness is that each letter includes different medieval figures. For example, a snake rolled around a letter, snake heads at the end of letters, different curls. It looks stylish, fashionable, and meets the medieval motifs. You can create different themed banners, logos and the like with Celtic 101.

This is a rather discreet medieval font that can bring sophistication, originality, and uniqueness to any project. Gothic Birthday Cake has already found wide application in various projects around the world. It supports a set of Latin letters, numbers, basic punctuation marks, and other additional symbols. It can even be used as the main font if the text is short.

This font is inspired by the Scandinavian runes, medieval motifs, brutality and originality. The font looks original and it looks like the letters are etched. Thors Hammer includes 2 files. The font is suitable for any project, both printed and desktop.

Alex is passionate about all the things related to WordPress and Elementor in particular. At MonsterPost, you can find a handful of cool tutorials shared by him.