Ahoy, me Hearties! Please don’t worry, I’m not insane and didn’t forget how to speak English. Just trying to talk like a pirate on the 'International Talk Like a Pirate Day.'

Frankly speaking, I’m pirate vocabulary is not my strongest side, but I’m madly in love with a couple of today’s most famous pirates of the Caribbean.

Who are they? Of course, it’s an inimitable

Of course, it’s an inimitable Jack Sparrow and a charming Will Turner. No wonder that Will won the heart of the sweetie Elizabeth Swann in the ‘Pirates of the Caribbean’ movie.

Avast ye! Let’s leave the wimpy love story and finally get to know what’s talk is all about.

Herein under I will tell you a little bit about the ‘Talk Like a Pirate Day.’ By the way, you can absorb the info listening to the rousing tune from ‘Pirates of the Caribbean’ movie.

Besides, we will view some marine templates from TemplateMonster to top it off.

Read on and make your friends laugh and cry “Blow me down!” – you are talking like a pirate!

Well, Matey, what is an International Talk Like a Pirate Day (ITLAPD)?

How did it appear?

According to the wiki, it's a parodic holiday celebrated on September, 19. Dating back to 1995 it was started by John Baur (Ol' Chumbucket) and Mark Summers (Cap'n Slappy), of Albany, Oregon, U.S., who proclaimed September 19 each year as the day when everyone in the world should talk like a pirate.

The holiday, and its observance spring from a romanticized view of the Golden Age of Piracy.

According to Summers, the day came into being as a result of a sports injury. The story is rather trivial. During a racquetball game between Summers and Baur, one of them reacted to the pain with an outburst of "Aaarrr!", and the idea was born.

That game took place on June 6, 1995, but they chose Summers' ex-wife's birthday, as it would be easy for him to remember and out of respect for the observance of the Normandy landings. 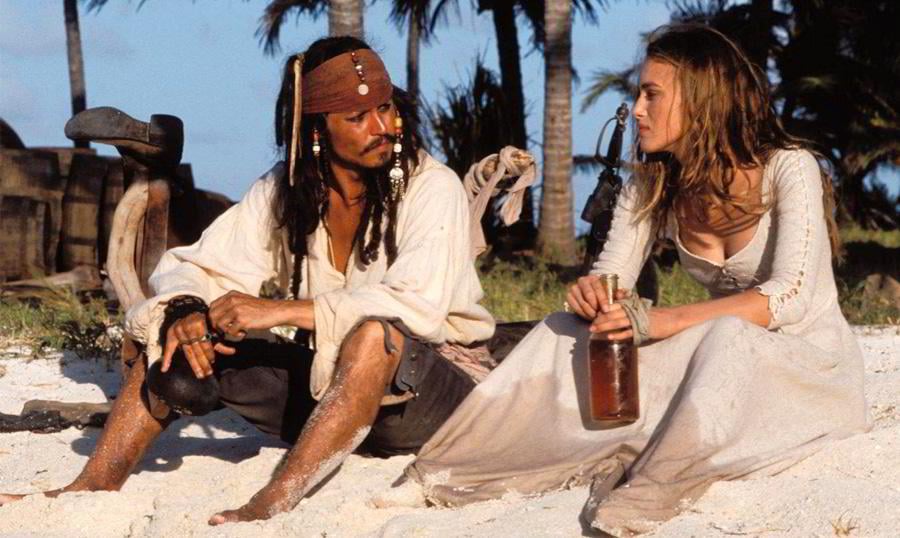 This is a joke between two friends. But it gained exposure when John Baur and Mark Summers sent a letter about their invented holiday to the American syndicated humor columnist Dave Barry in 2002.

All of a sudden, Barry liked the idea and promoted the day. Growing media coverage of the holiday after Barry's column has ensured that this event is now celebrated internationally, and Baur and Summers now sell books and T-shirts on their website related to the theme.

The holiday is open to creativity and "viral" growth as it is not restricted or trademarked.

The association of pirates with peg legs, parrots, and treasure maps, popularized in Robert Louis Stevenson's novel Treasure Island (1883), has had a significant influence on parody pirate culture.

BTW, undoubtedly, you have noticed that 'Talk Like a Pirate Day' is celebrated with hidden easter egg features in many games and websites, with Facebook introducing a pirate-translated version of its website on Talk Like a Pirate Day 2008 and publisher O'Reilly discounting books on the R programming language to celebrate.

Minecraft also features this language (en_PT) since January 5, 2012. Even Reddit added a pirate theme to their website in September 2014.

English actor Robert Newton, who became popular playing pirates, especially Long John Silver in the 1950 Disney film Treasure Island and the 1954 Australian film Long John Silver and the title character in the 1952 film Blackbeard the Pirate, is described as the "patron saint" of Talk Like a Pirate Day.

The point is that Newton was born in Dorset and educated in Cornwall, and it was his native West Country dialect. He just used it in his portrayal of Long John Silver and Blackbeard, but some experts contend that was the origin of the standard "pirate accent."

The archetypal pirate grunt "Arrr!" (alternatively "Rrrr!" or "Yarrr!") first appeared in fiction as early as 1934 in the film Treasure Island with Lionel Barrymore starring, and was used by a character in the 1940 novel Adam Penfeather, Buccaneer by Jeffrey Farnol.

However, it was popularized and widely remembered with Robert Newton's usage in the classic 1950 Disney film Treasure Island.

I hope I didn't bore you with all those details. Enough with them! Are ye ready to learn some common pirate phrases?

Then, here is a brief Old Salt dictionary

Try to remember the expressions. It will be fun to talk like a pirate today!

Aaaarrrrgggghhhh! - an exhortation of discontent or disgust.
Ahoy! - Hello!
Ahoy, Matey - Hello, my friend!
Ahoy, me Hearties! - the same as saying "Hello, my friends!"
All hand hoay! - comparable to all hands on deck.
Avast ye - stop and check this out or pay attention.
Aye - yes.
Batten down the hatches - put everything away on the ship and tie everything down because a storm is brewing.
Bilge-sucking - insult.
Blimey! - an exhortation of surprise.
Blow me down! - expression of shock of disbelief akin to "Holy Crap!"
Blow the man down - command to kill someone.
Booty - treasure.
Buccaneer - a pirate.
Bucko - a buccaneer.
Cat O'Nine Tails - a whip with nine strands.
Cleave him to the brisket - to cut across the chest, from one shoulder to the lower abdomen.
Corsair - pirates in the Mediterranean Sea.
Crow's nest - small platform atop the mast where the lookout stands.
Cutlass - short heavy curved bladed sword used by pirates.
Davy Jones' Locker - fabled, mythical place at the bottom of the ocean where the evil spirit of Davy Jones brings sailor and pirates to die.
Dead men tell no tales - phrase indicating to leave no survivors.
Doubloons - other coins or found in pirate hoards and stashes.
Feed the fish - will soon die.
Hang 'im from the yardarm - punishment of those captured in battle.
Head - the pirate ship's toilet.
Heave Ho - give it some muscle and push it.
Hempen Halter - a noose for hanging.
Hornswaggle - to defraud or cheat out of money or belongings.
Jacob's Ladder - the rope ladder one uses to climb aboard a sloop.
Jolly Roger - pirate's flag including white skull and crossbones over a black field.
Keelhaul - punishment in which a person where dragged underneath the pirate ship from side to side and was lacerated by the barnacles on the vessel.
Lad, lass, lassie - a younger person.
Landlubber - big, slow clumsy person who doesn't know how to sail.
Letters of Marque - letters issue from governments during wartime to privateers endorsing the piracy of another vessel.
Man-O-War - pirate's ship outfitted for battle.
Me - my.
Mizzen - third mast from the bow of the ship on ships that have three or more masts.
Old Salt - an experienced sailor.
Pieces of eight - coins or found in pirate stashes.
Pillage - rob, sack or plunder.
Poop deck - the part of the ship farthest to the back, which is usually above the captain's quarters. This is not the bathroom.
Privateer - government-sponsored pirates.
Rum - pirate's traditional alcoholic beverage.
Run a shot across the bow - warning shot to another vessel's captain.
Savvy? - do you understand and do you agree?
Scallywag - mild insult akin to rapscallion or rogue.
Scurvy dog - the pirate is talking directly to you with mild insult.
Scuttle - to sink a ship.
Seadog - old pirate or sailor.
Shark bait - will soon join Davy Jones' Locker.
Shipshape - cleaned up and under control.
Shiver me timbers! - comparable to "Holy Crap!"
Son of a Biscuit Eater - insult directed towards someone you don't like.
Splice the mainbrace! - give the crew a drink!
Thar she blows! - Whale sighting.
Three sheets to the wind - someone who is very drunk. One sheet is mildly drunk and four sheets is passed out.
Walk the plank - punishment in which person walks off a board jutting over the side of the ship while at sea. The consequence is drowning and a visit to Davy Jones' Locker.
Weigh anchor and hoist the mizzen! - pull up the anchor and the sail and let's get going.
Ye - you.
Yo Ho Ho - cheerful exhortation to demand attention.

I am sure everything is shipshape, and it’s time to pass to searching for the booty (in our case it will be the best and the newest marine website templates)! Get it?

May your sailing be fortunate! 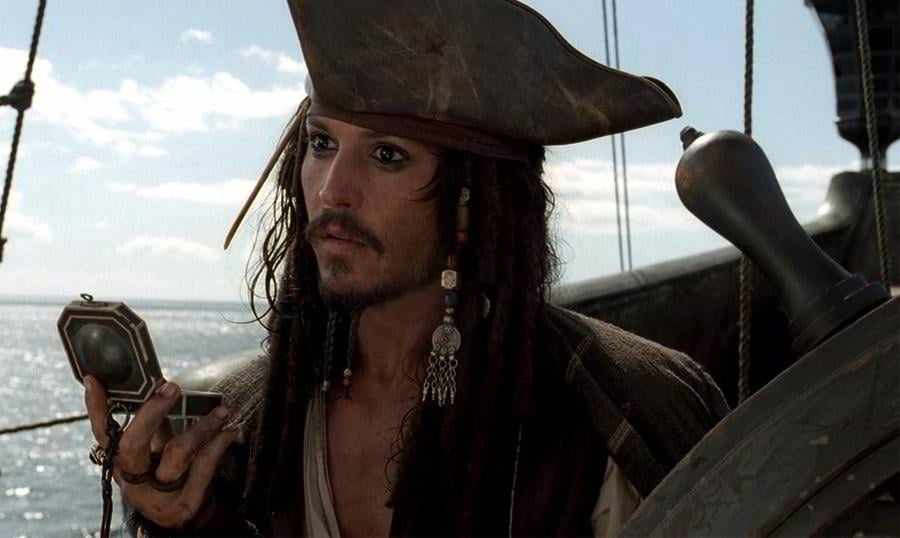 The theme was developed for marine transportation companies. It looks solid, serious and trustworthy. However, this doesn’t prevent it from being eye-pleasing. Created by the team of professionals, the template is responsive, which makes it a number one choice for those who want to provide the utmost comfort to their customers and never limit them in terms of browser & device choice. The theme comes with the parallax effect that creates the illusion of space on your screen, no matter whether it is wide or small. 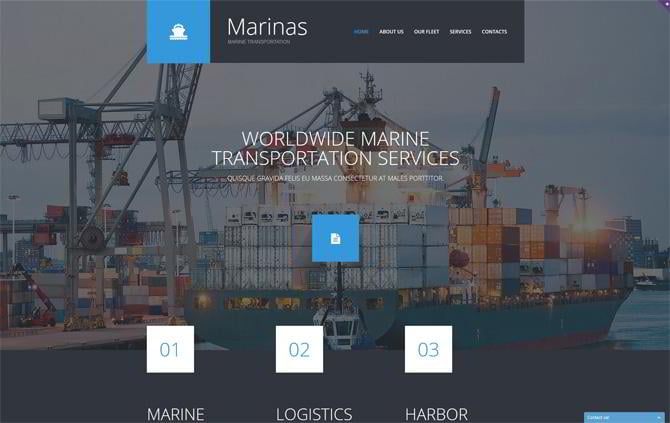 This is a ready-made store, where you can sell your marine gear. The theme is fully editable, which means that you can adjust everything you wish to make your web shop unique. Fine-tune the slider, change the default fonts, set the sidebar position and choose post formats from the list of the available ones. Use 80+ shortcodes to minimize your efforts and cut down the time till your project launch. 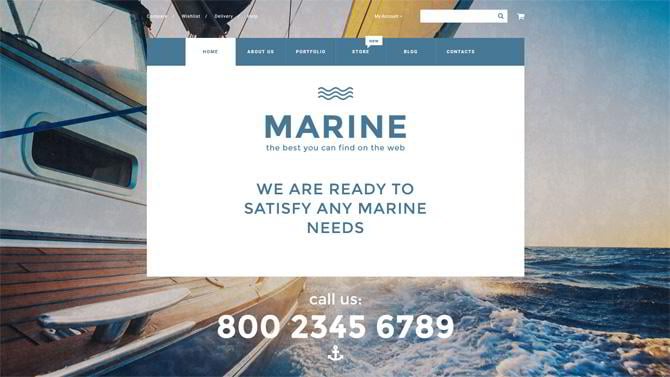 Here is one more water-tight design for the marine transportation company. I like the red elements used by the author. They guide user’s eyes through the web page and give a clear notion of what’s really important. The theme has valid semantic coding, loved by Google and appreciated by web developers so much. It gives you the opportunity to choose between Carousel and Slider gallery scripts as well. You can easily change theme’s colors for your corporate ones with Theme Color Switcher.

The best theme for a marine construction company. Do you own one? The theme is very easy to work with and edit. HTML plus JS animation revives its layout. You can present the information about your company capacities in the dynamic slider. It is equipped with a contact form; your customers will be able to send you a quick message. Indicate your office location on the Google Maps so that the clients could find it without any problems.

The store for any marine needs, be it equipment or uniform. This theme comes with parallax effect which makes it impressive. It is also provided with MegaMenu, a very useful thing that won’t let your customers get lost in the ocean of your products. You can use all power of Bootstrap when customizing your store and enjoy all its benefits after the project launch. Besides, the theme is SEO friendly, which will make your website visible to many others on the Internet. 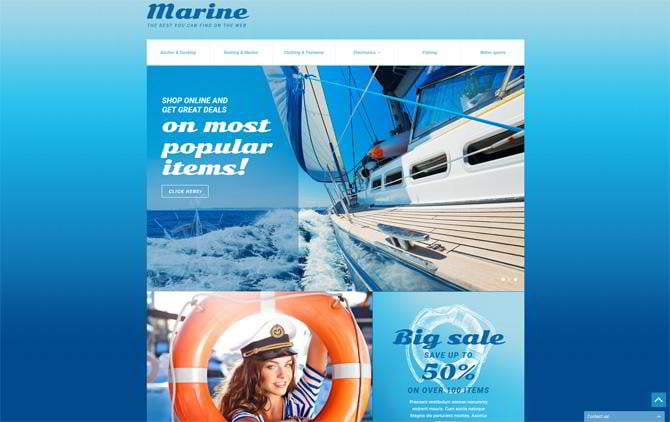 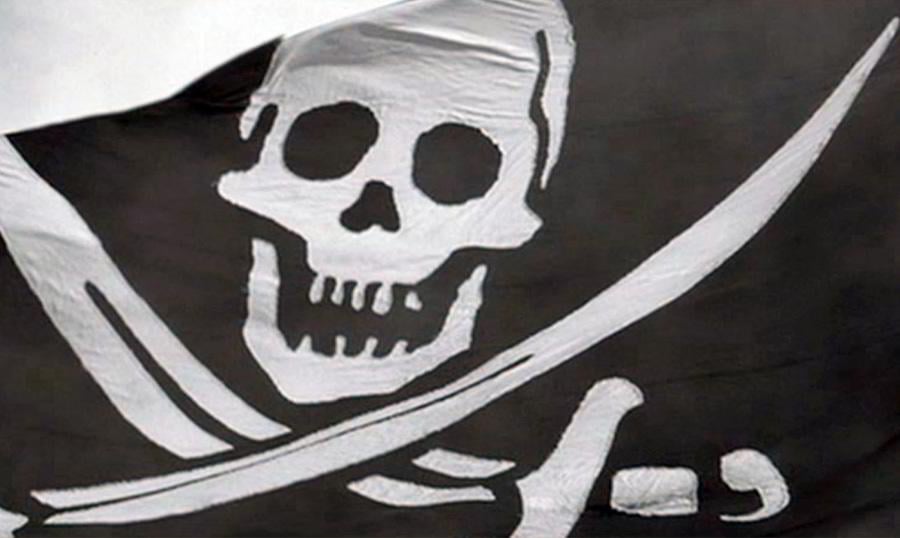 Of course, there are much more common pirate phrases. Do you know any? A pirate phrase, word, some pirate lingo or a bit of pirate vocabulary?

And don’t forget to like and share this article if you like ‘Pirates of the Caribbean,’ the music you are listening to right now, rum, romantic marine designs, whatever.

Weigh anchor and hoist the mizzen!