Octopus Illustration: The Use of Octopus in Art and Design

Perhaps, one of the most mystical and mysterious creatures that live in the depths of the sea is the octopus. Many ancient legends and traditions tell about this marine inhabitant and its incredible abilities. The octopus gained special popularity and attention after the release of the adventure film "Pirates of the Caribbean." 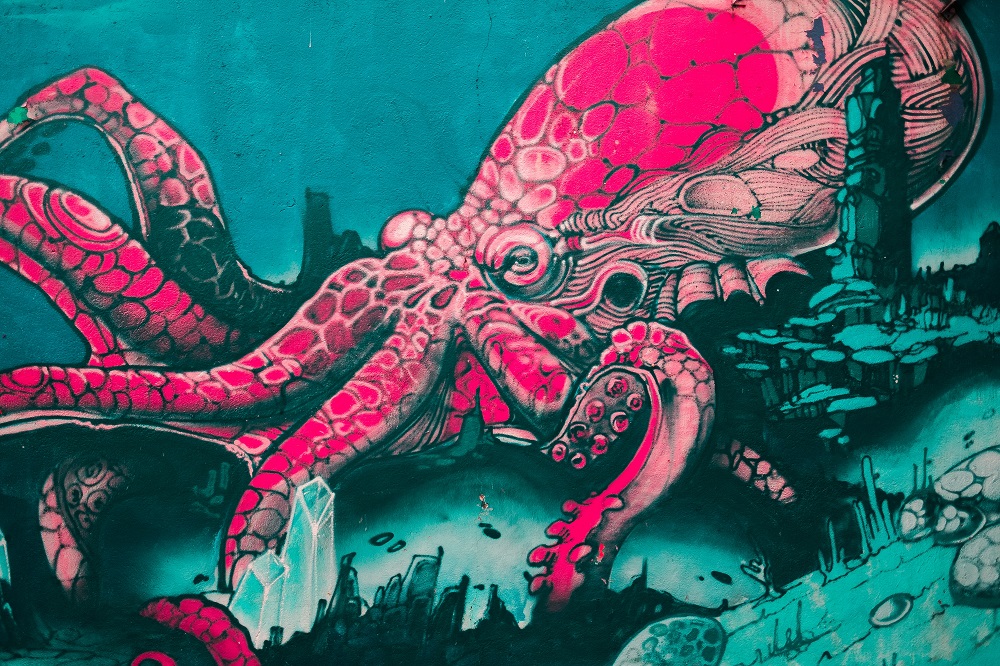 Surely, one can say how it is possible to admire this slimy and not very pleasant to the touch animal. However, artists and designers of different times and centuries have used and still use the image of the octopus in various works of art. After all, the incredible, natural ability to change not only the color of its body but also to bend its many tentacles, gives a wide opportunity for designers and sculptors to expand their imagination. This article will try to unravel the mystery of this eight-limbed mollusk's popularity in art and discuss all possible variants of octopus illustration in media and design.

Octopus illustrations and the related motives are presented in media, interior, and web design. We can meet such an octopus cartoon character as Squidward Tentacles in the television series “SpongeBob SquarePants,” Kang and Kodos, the octopus cartoon characters of the well-known TV series “The Simpsons,” and others. The personage can be also heard in the song “Octopus's Garden” by The Beatles.

In the interior design industry, the shapes of octopus give them a great variety of possible design solutions. For instance, when creating furniture, designers use the tentacles of an octopus, bending them into various bizarre shapes or as an incredible opportunity to give tables and chairs an unusually mystical look, and an armchair made in the shape of an octopus’s body, standing on curving tentacles, appearing like a real throne of the sea king.

Sculptors create their octopuses of various shapes and sizes, making them of gypsum, steel, stone, and decorating them with colored glass mosaics. Master jewelers make jewelry in the form of bracelets, pendants, earrings, and rings. Marine themes are used in the creation of children's toys and clothing, and in the decoration of children's rooms. In general, most artists, designers, sculptors, or painters have once used the image of this marine inhabitant in their works of art, and everywhere it fits well and harmoniously with its extraordinary imagery.

Web designers also appeal to the octopus character and use it in their illustrations for the creation of brands, web pages, and particularly logo images. In general, animal illustration, insect illustration, or various fantastic creatures illustration are extremely popular in web design. As for the octopus illustration, it gives a designer a number of features and original ideas for design creation. With its eight tentacles, an illustrated octopus can be the personification of multi-functionality, as well as many-sided and creative characters. Octopuses look a bit awkward, and thus a happy octopus can be a representation of something fun and creative.

For instance, an octopus in a hat or an octopus illustration with eyeglasses can be super happy whimsical pictures. What's more, an octopus is a mysterious and somewhat dangerous living being, which can be used for the creation of a certain image. Notably, the octopus, being the creature from the depths of the sea, is the personification of a number of things related to the marine sphere. An illustrated octopus always looks unusual, interesting, creative, and at the same time, harmonious. In this way, an octopus illustration can be used in a wide spectrum of topics and is great for logos.

How to make an octopus logo

If you want to try making an octopus illustration for your logo or just want to create a vector octopus for fun, here is a step-by-step guide. You will need a vector graphic editor such as Adobe Illustrator. This tutorial will utilize simple shapes and tools and will suit even for beginners.

As a result, you will get a funny and creative octopus character, which will suit perfectly as a logo.

If you don't want to draw this yourself, there is a variety of free resources allowing you to download and use octopus vector art. Vector art represents any art created with vector graphics. It uses mathematical formulas to create images. This form of illustration uses vector illustration software such as Adobe Illustrator. An octopus illustration made with vector graphics looks great and will be the best choice for logo design and small illustrations. For instance, Freepik has more than four thousand octopus graphics. Pixabay also allows you to use free octopus vector images. The site Vecteezy also provides a number of free octopus graphics.

Sketching is another popular illustration form. The sketch is an illustration that is done freehand. The technique is applied to make the primary representations of the final drawing results. Being the initial step of drawing, sketching nowadays is widely used as an independent form of art. What is more, its popularity in fashion, fine arts, and illustrations has ensured it a wide application in web design. Thus, numerous examples of sketch illustrations used in web design can be found among TemplateMonster illustrations. A number of sketches of octopus can be found on Pinterest or Shutterstock.

The popularity of vintage styling is great. It is now used in clothing, interior designs, and also web design. Vintage design gives another interesting alternative to modern trends. Old things or things that are specifically made to look old have their special atmosphere and history. They embody some mystery behind the antique appearance and thus remain attractive to people. What is more, in the tech age, the things that have a history or look like they have history become more interesting as if they have some story behind them.

Also, vintage items can serve longer as they don't follow innovative and quickly passing trends. Vintage styles add some visual experience, exploitation, and exclusivity. Art and web design also applies a vintage style. Talking about octopus illustration, there is a great variety of vintage octopus illustration from various resources. Some interesting and inspiring ideas can be found on VectorStock and among octopus Pinterest images.

Octopus illustration in other art forms

An octopus character is unusual and many-sided. It can be a frightening personage, or pathfinder octopus, or a monster octopus, while at the same time, it may look funny, friendly, and happy. Octopus tattoo Pinterest pictures show how the octopus illustration may appear on the human body. Also, you can see the interesting and unique examples of Japanese octopus drawings on Pinterest. However, there are also other forms of art that use octopus illustrations. 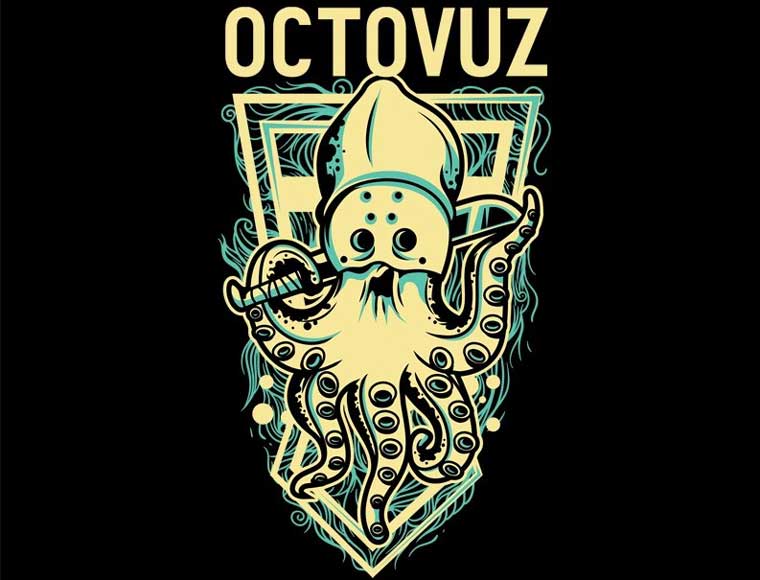 Are you looking for a scary octopus design? You’re on the right path, buddy. Check out this Slashing Party 3 illustration. In the picture, you can see an evil octopus with a long and heavy knife ready to slash anybody. Scary enough, isn’t it? The illustration itself is done in a black, white and bluish color scheme and has a CMYK color mode that’s great for printing. The file is 100% vector, so it has really high quality. And the resolution of it is 300dpi. You can easily change the color and the size of this illustration. Don’t be afraid to change the size and to make it bigger. The quality won’t get worse. Within the pack, you get the AI file itself, so you should have Adobe Illustrator to work with this octopus illustration, EPS 13 and 10 version, the PDF file, the PNG file with a fully transparent background. You’ll get all the instructions you need for working with this octopus item in the Readme file. This octopus illustration you can use on the Helloween time, for printing on T-shirts, and other pieces of cloths, tattoo ideas, and other kinds of design. Download this evil octopus illustration for any purpose.

If you’re looking for a nice eye-catching octopus illustration, check out this Kraken Octopus Polygon Colorful Logo illustration! This item would be great for cafes, restaurants, cards, software companies, marketing companies, architecture companies, art schools, or any other purpose. The possibilities are literally endless and you can use it wherever you would like to. In the illustration itself, you can see a Kraken octopus done in a vector style and in a rainbow color mode. A lot of pieces of different colors create the whole octopus picture. Below it, you can place your company or brand’s name using cool fonts. As the picture is fully vector, its quality remains the same even when you’re changing its size. And yes, one more thing, you can change the color and the size of this octopus illustration. To do this, you have to have one of such editing apps like Adobe Illustrator of any version or something similar. All that you need to have is a company or any other establishment bringing you income, we have the cool Kraken octopus illustration, and together we create an unforgettable logo and attract more customers! Don’t hesitate and download this octopus item and use it for any purpose.

The octopus is an interesting personage for various media forms, art, and design. Its shapes and many-sided representations of the character provide a lot of ideas for creative people. Octopus can be described as a monstrous, dangerous, or mysterious creature, as well as a friendly and funny one. Making octopus illustrations give designers numerous ways to implement their fantasy. As indicated in the article, octopus images are widely used in cartoons and even movies. Interior designers involve the shapes of octopus in various interior forms. Octopus illustrations are here and there in logo and brand designs. Octopus illustrations can even appear on the human body. Thus, it can be said that the octopus is an incredibly inspiring creature for various forms of art, and its application in the sphere is unlimited.

Cat Illustrations for Any Purpose!

Fox Illustration one way of Making Your Life Colorful

Fish Illustration as an Unconventional Element in Web Design

Writer and editor with 4 years experience in research writing and 5 years in professional editing. The areas of interest include psychology, online marketing, web design, game design, art, innovation, and scriptwriting.  Reach her on Facebook.