They started selling tickets at 9 am PST. The official “sold out” announcement appeared a few hours later — just before 1 pm. More than 130,000 people bought their tickets in less than 4 hours. Even more are waiting for the next year to try their luck again. What’s all the buzz about?

Just like every year before, it is the biggest, the geekiest, and the most anticipated event in the history of having fun — San Diego Comic-Con 2016. This year, studios and channels were revealing their greatest announcements on July 21–24, and those were quite awesome. The trailer of Justice League is already the talk of the internet, but wait, there is so much more.

MonsterPost puzzles out the biggest news from San Diego Comic-Con 2016 for you. If you get into the spirit, don’t forget to check out our website templates for geeks.

[Disclaimer! This text contains spoilers, subjectivity, and superheroes. You’ll like it.]

After Batman vs Superman made so many scenes just for the sake of introducing the Justice League, we knew the gang of superheroes was coming. So they announced the trailer. Was it any good? Well, it was… amazing! It was so great that I still can’t put my emotions aside.

Except for the already-known Batman and Wonder Woman (both Ben Affleck and Gal Gadot are just awesome), we got to see Flash, Cyborg, and Aquaman (who doesn’t suck at all). Also, it seems like Warner Bros. adds jokes to their usual “DC gloom and sadness”, and the result is quite I-want-to-watch-this-movie-right-now.

Unfortunately, we still have to wait till 2017, but the trailer is at our disposal.

While Marvel is only introducing their new Iron Man as a 15-year-old African-American girl, DC’s Wonder Woman has been the most famous female superhero for years. And with a new movie upcoming, she’s definitely having the time of her life. Just look at the new trailer.

Wonder Woman is going to participate in the World War I, operate her lasso like no Texan cowboy could, and be just as jaw-dropping as ever.

To be honest, I’m still spellbound by this character in Batman v Superman. She totally nailed not only Doomsday but both Batman and Superman with her charisma. The trailer presented at Comic Con promises she won’t be any worse in her own movie.

Marvel strikes back. Well, not exactly — they are quite different to compare. There’s one thing I know for sure: the Doctor Strange trailer is definitely worth your attention. It has some of the most intense music I’ve ever heard, and its stage set looks like it was inspired by the Inception and Benedict Cumberbatch's beard.

I dare you, watch the trailer and try to tell me it's not the most awesome thing that you've seen in months:

Yes, there will be the fourth season. Yes, there will be only three episodes in it and god knows how long it’ll take to wait for the following ones. But for now, we can be sure that “something’s coming” and this something is darn good.

Please don’t watch the official teaser if you don’t want to spend the rest of your life waiting for the next season. On the other hand… go ahead, it’s so worth it.

Fantastic Beasts and Where to Find Them

My sending-shivers-down-my-spine moment is still that very song from the Harry Potter. (Or, to be precise, the variation on "Hedwig's Theme" they use.) The rest doesn’t manage to beat it. But they do manage to show the atmosphere of magic and fantasy. After all, this is what we came for.

More importantly, we got to see some beasts in the trailer at last. It’s always a pleasure to look at Eddie Redmayne, especially “with a case full of magical creatures”.

Oh, oh, and they have Colin Farrell!

All the best trailers begin with bad guys drinking to honor among thieves. This is my strong belief. Yes, I’m perfectly aware there are not so many trailers of this kind (what a pity). Yes, what I’m implying is that every Suicide Squad trailer raises the bar for the genre higher and higher.

Well, I’m a bit of a fan, if you haven’t noticed yet. But really, the Squad is so amazing. And Margot Robbie is so hot and witty. And Jocker. And Will Smith. And this whole “bad guys doing good deeds” thing. They’ve just blown my mind with their Comic-Con Soundtrack Remix.

King Arthur: Legend of the Sword

Those were just the tip of it. Here’s more.

They’ve announced Brie Larson will be Captain Marvel. What can I say? A great actress for a great superhero. We all look forward to seeing her in action.

Check out the new Marvel Studios logo that just debuted at #SDCC in Hall H!https://t.co/xUX0WTvCyB

Rihanna will play in Bates Motel TV series. She will embody the iconic heroine Marion Crane, a character we know from Alfred Hitchcock’s “Psycho”. I’m sure even Mr. Hitchcock, a famous fan of blonde actresses, would fall in love with this choice.

.@rihanna to check into #BatesMotel as Marion Crane in the 5th and final season!https://t.co/7t2pRL43cf

I know, I know, Comic-Con 2016 was amazing. But it’s over now and it’s a year till the next one. But if you want to keep this geeky spirit for all, this time, we recommend you to take a look at these website templates for geeks. They will cheer you up on your way to San-Diego Comic-Con 2017.

Do you like superhero movies as much as I do? Or maybe, you’re more into playing video games? Then why not write about them on your own website. Here are 10 fully-responsive good-looking WordPress themes where every geek will feel right at home.

In 2006, my friend and I have made a bet who’ll watch more movies during 365 days. Since then, we keep a list of all films we watch and sum up the results on New Year's. So yes, I do know a thing a two about movie websites and blogs. That’s why I can say that all the real filmaholics will like this design for sure. Easy menu, bright colors on a gray background will attract your customers’ attention where it’s needed. 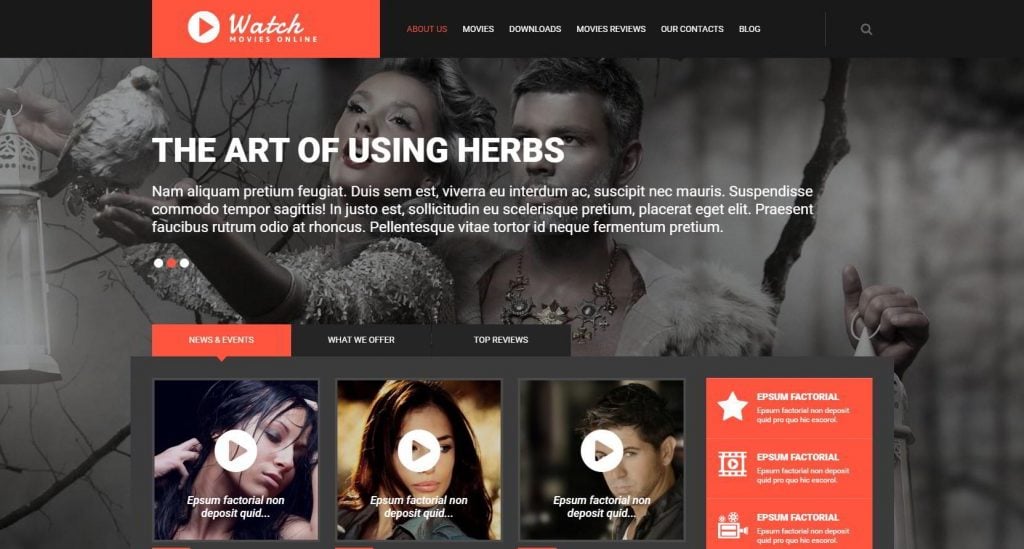 Have you played the latest Far Cry Primal? As always, Ubisoft has created another beautiful game, where you can watch the sunset, enjoy the next horizon, to look at green meadows. That’s where the designers and developers got their inspiration for this theme. Suffice it to say, this template is not overloaded with excessive elements what makes it clear yet stylish. Also, it is licensed under the GNU GPL v3.0, what gives you a lot of freedom.

This theme is certainly made for comic-con fans — the theme of steel. An easy menu won’t tangle up your readers. All the elements are harmonic and easily readable. Also, you’ll get a package of hi-res stock photos along with this theme. The best thing about this template is its header. It catches the eye from the first sight. The theme is a perfect choice for a cool website with taste. 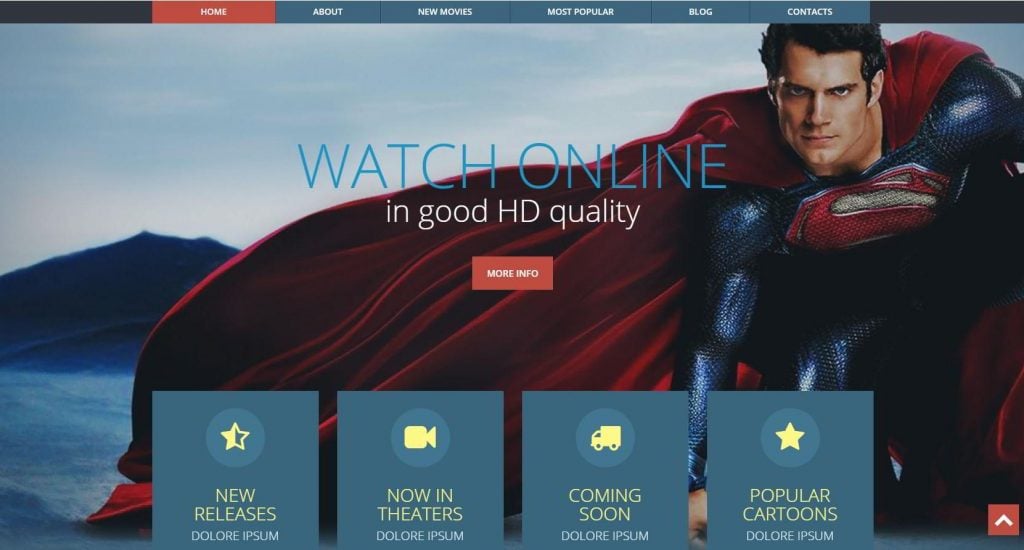 This theme proves that plain design can do wonders. Just look at how wonderful and easy all its parts go together. Moreover the theme is fully editable, so you can add your taste and preferences to every tiny detail of your website design. Also, thanks to the responsiveness, this theme will look equally good on all devices.

One of the best-looking themes of this season, the Play Games template looks just as gorgeous on a mobile phone as it does on a crisp HD desktop PC. No matter the size of your screen, what you’re left with is a fun, structured layout that is both memorable and user-friendly. Pay attention to how visual this template is, with its rectangular video game covers in the middle of the main page and a huge hero image on top. That’s because video games is a visual medium, so it should be a no-brainer for your audience to instantly like what you’re doing. 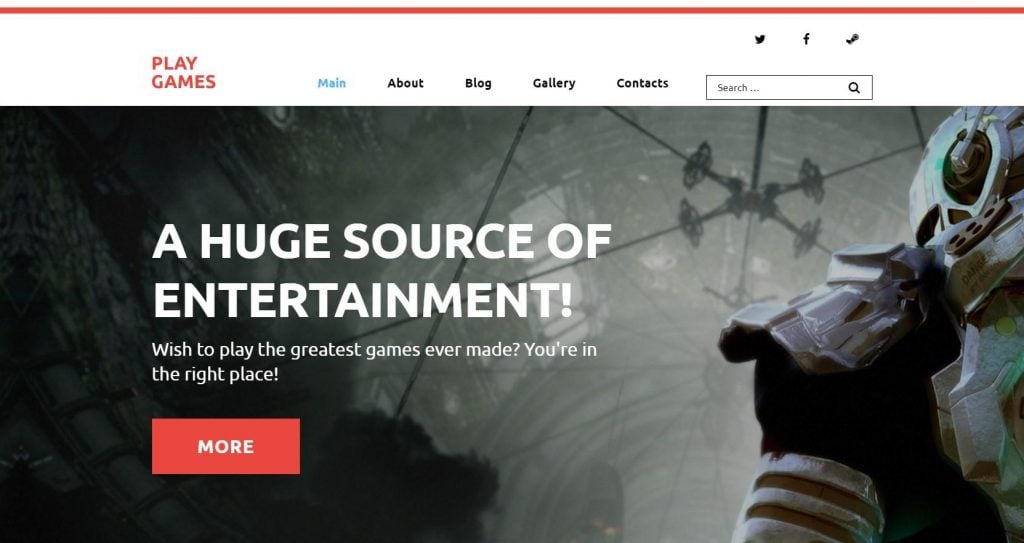 One of the best ways to give your website a bit of a visual flair is to implement animations. This pre-built template is a stylish example of how well that approach could work for an entertainment website. Images stylishly zoom in and out when you hover, buttons change their color, videos fade in and out. What’s even better, the animations were implemented thoughtfully and lightly: there’s no resource hog and obtuse grotesque we so often witness when animations go wrong. 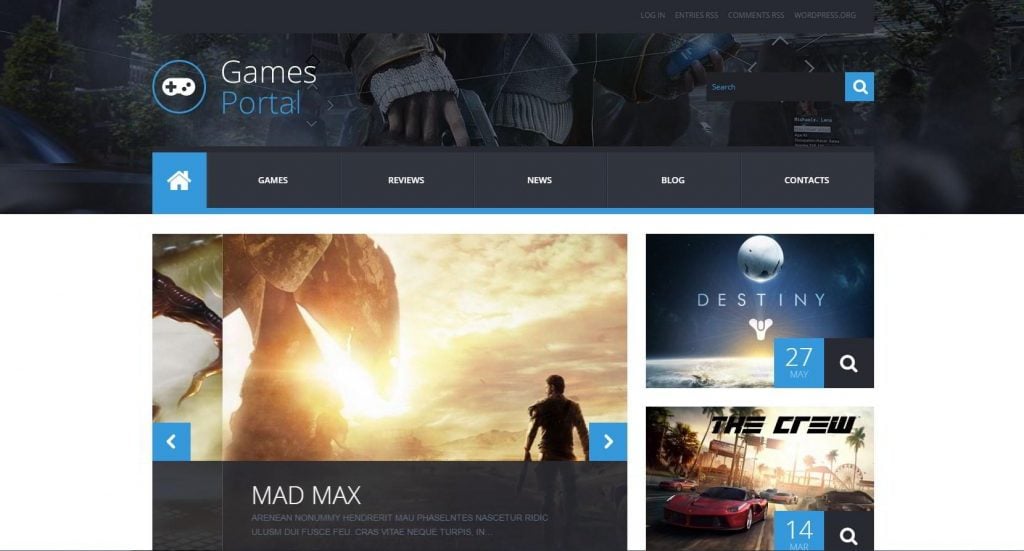 A trendy, visually appealing website template, this one is a masterclass in doing more with less. There’s not a lot of elements on the main page here, the layout is structured around the huge hero image on the top of the page and four rounded images in the middle. What you get is a simple, no-nonsense design that is fun in its own stylish way: looking like this, your blog will be considered to be serious business. 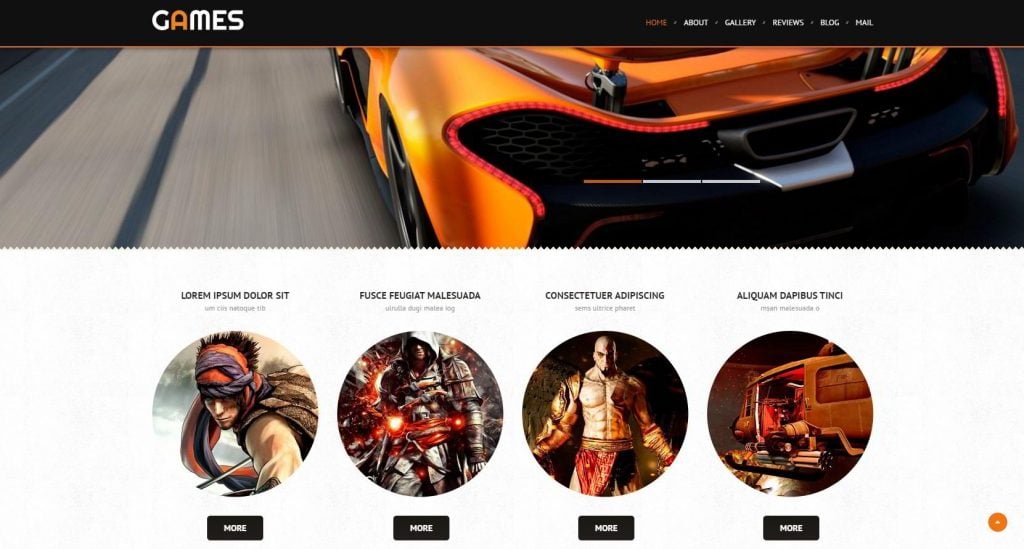 If you plan on publishing a lot of content, your layout should help you present everything you do in an easy-to-follow manner. Thankfully, the design team behind this pre-built template considered very thoughtfully what a modern online magazine means. The main page of this template is able to pack a lot of information, but your readers will never feel lost due to its grid-like structure and clearly color-coded sections. 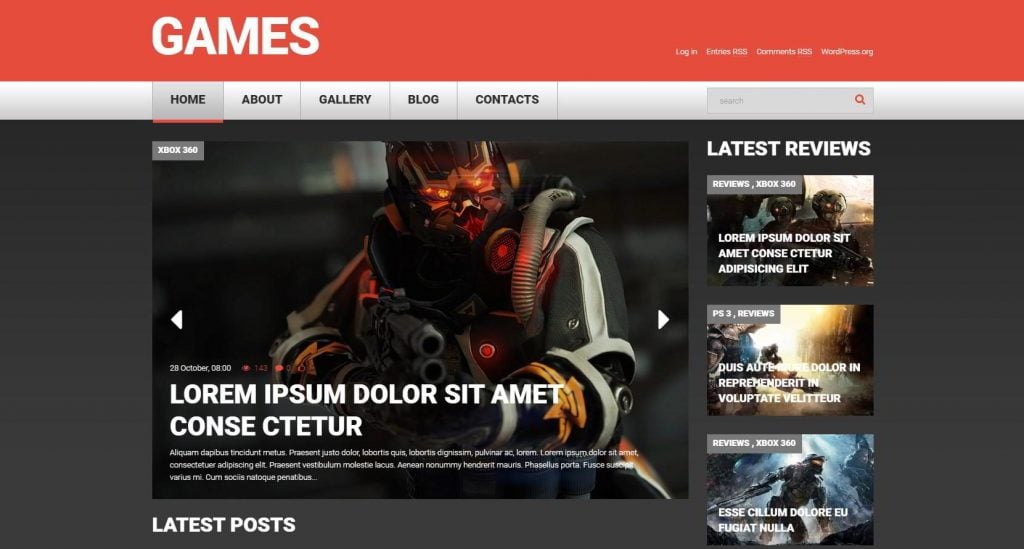 Creating your own blog about video games can become an easy task with this pre-built theme. The advantageous combination of colors will show all you’ve got in the best light. All the locks of this theme are just good together. (But it’s not accidental at all, our designers thought through every teeny-tiny detail carefully.) With this theme, game blogging will be as easy and interesting as it gets.

There’s no need to rediscover continents again. In most cases, all your reader needs is clean and simple design where they can find everything in a few clicks. That’s exactly what this template does. It’s not overloaded what makes it easy on eyes. Moreover, the theme is 100% responsive and editable. 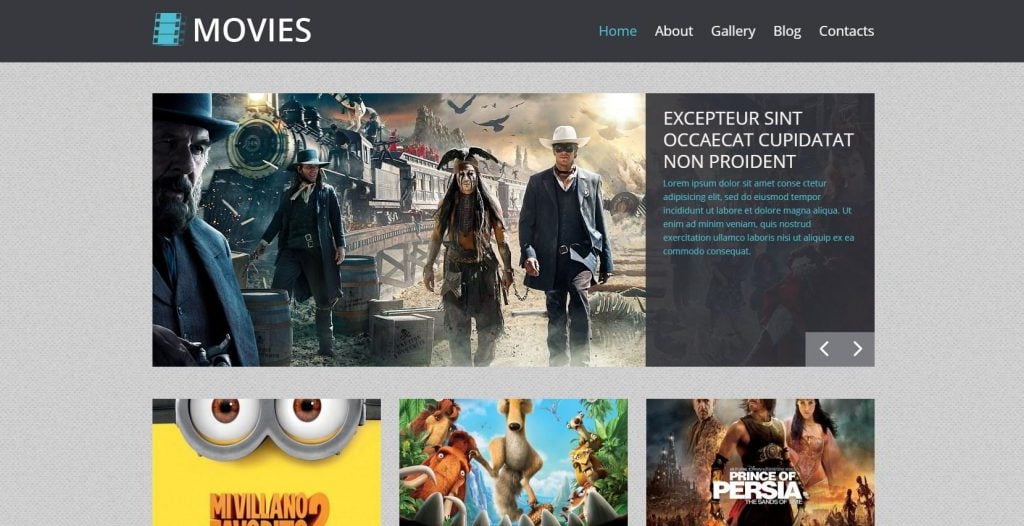 Now, what about you? Have you ever been to Comic-Con? Or maybe, you've chosen your new favorite website template just now? Share your opinion in the comment section below.