Google Plus may be the baby of the social media family, but it’s growing up rapidly and adding features, users, and reach very quickly. How useful Google+ is for web masters, marketers, and SEOs is a subject of constant debate, but we can be sure that as Google iterates on the social media network and its core properties like search, Google+ will play an increasingly important role, especially as Google seeks to rebalance the emphasis from link-dominated ranking algorithms to ranking based more heavily on social and reputation-based signals. When that’ll happen is up for debate at the moment, but I for one wouldn’t bet against authorship being a ranking factor in the future.

Facebook has had a commenting system that can be integrated with WordPress for quite some time, but it’s only recently – after a long period of speculation – that Google has made similar functionality available for Google+. Initially, Google+ comments were intended for Blogger, Google’s own blogging platform. But, given the ingenuity of the WordPress community, it was a good bet that it wouldn't be long before someone created a plugin to make integration of Google+ comments and WordPress a breeze. 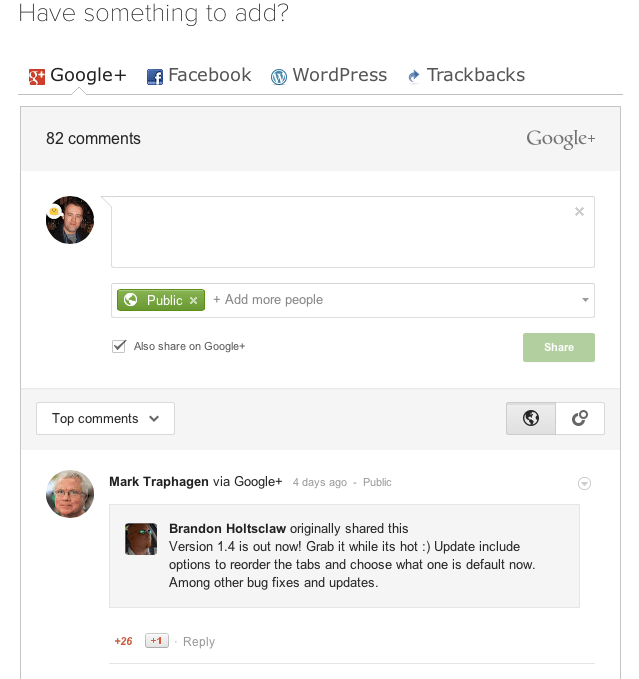 There are a few such plugins available as we write, but the best of the bunch comes from developer, Brandon Holtsclaw . You can check out Google+ comments in action on his site. Google+ Comments For WordPress brings Google’s rather pretty comments threads to WordPress articles.

A huge benefit of using integrated social media commenting is that conversations are not split over two locations. Comments made on Google+ are part of the comment stream on the article in WordPress, and vice versa. Shares on Google+ are also displayed in the comment stream. That means that if you write an article and it gets shared on Google+, that share and any comments attached to it will appear below the article. Multiple conversations inspired by a topic are drawn together in one place.

One of the best features of this plugin is that it also handles Facebook comments, and WordPress comments, so you aren’t forced to choose between them. Each can be displayed on its own tab, and you can control which of them is displayed by default.

Regardless of your feelings about Google Plus, its commenting system, and this plugin in particular, are worth testing on their own merits. Let us know in the comments if you’ve given it a try and what you think.

Graeme works as an inbound marketer for Nexcess, a leading provider of Magento and WordPress hosting. Follow Nexcess on Twitter .

How To Sell HTML Templates Online with TemplateMonster

3 responses to “Bring Google+ Comments to Your WordPress Blog”