Are you curious about trends in web developers salary 2018-2020? In this post, we will show you some eye-opening trends, including why web developer is possibly one of the best jobs of the 21st century.

The Rise Of The Developer

With developers becoming the “rock stars” of the digital age, tech sites like InfoWorld are proclaiming this “the rise of the developer”. Along with this rise, developer salaries have gone up over the last five years.

What has not abated is the call by tech companies for more web design and development talent. The Monster job board points out that the tech talent shortage is, in fact, direr than many think. The data from 1500 Chief Information Officers confirms what many hiring for tech talent has experienced. Salaries are not only trending higher over time, but the competition for the talent remains fierce.

To solve this dilemma, outstaffing, and outsourcing companies from Eastern Europe, Asia, and Southern Europe provide remote WordPress themes developers. This will become a more and more appealing solution for technology organizations.

To understand why to consider the data for the growth in jobs that require the hard to find tech talent.

App developers are to be found in many different countries. Their salaries vary widely with location and experience.

Wage growth figures available from Computerworld indicate that salaries have risen at a higher pace in the last three years than in the preceding decade. For example, in 2015, wages in the web development field grew at 3.6%. Going back four years earlier than 2015, in 2011, wages only grew 1.4%. 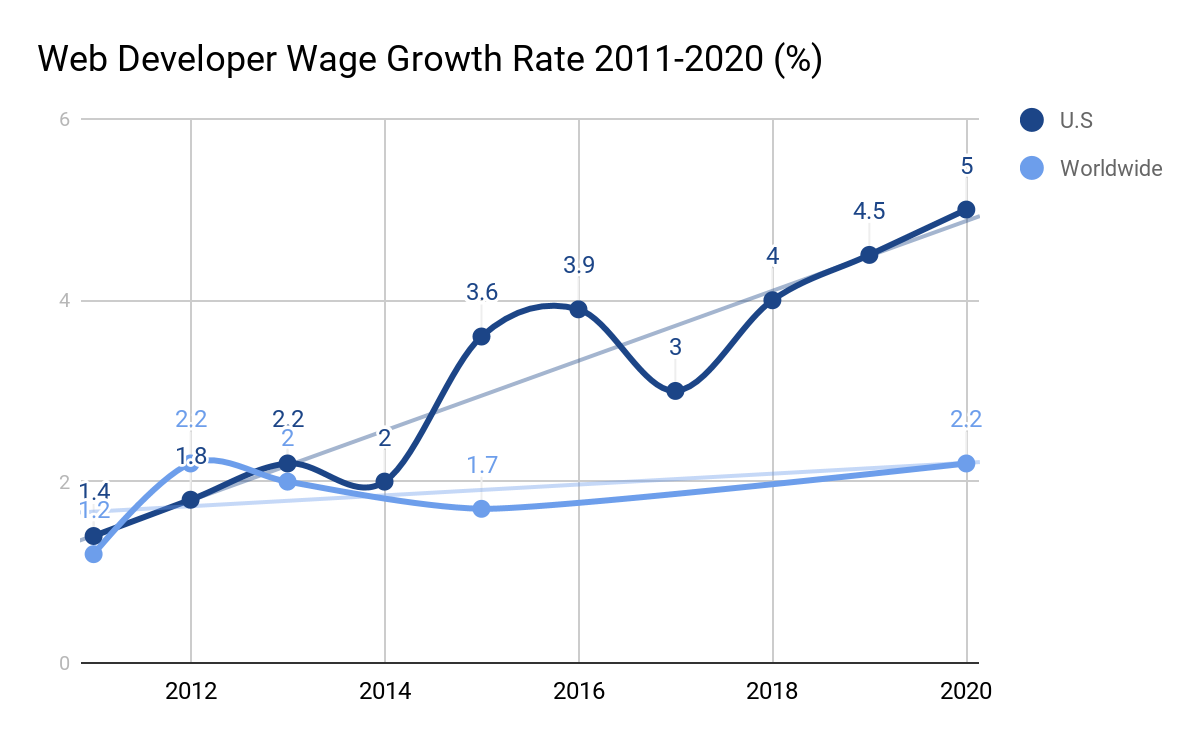 The accelerating growth in salaries in tech and app development is consistent with Fortune’s report that there is high market demand. 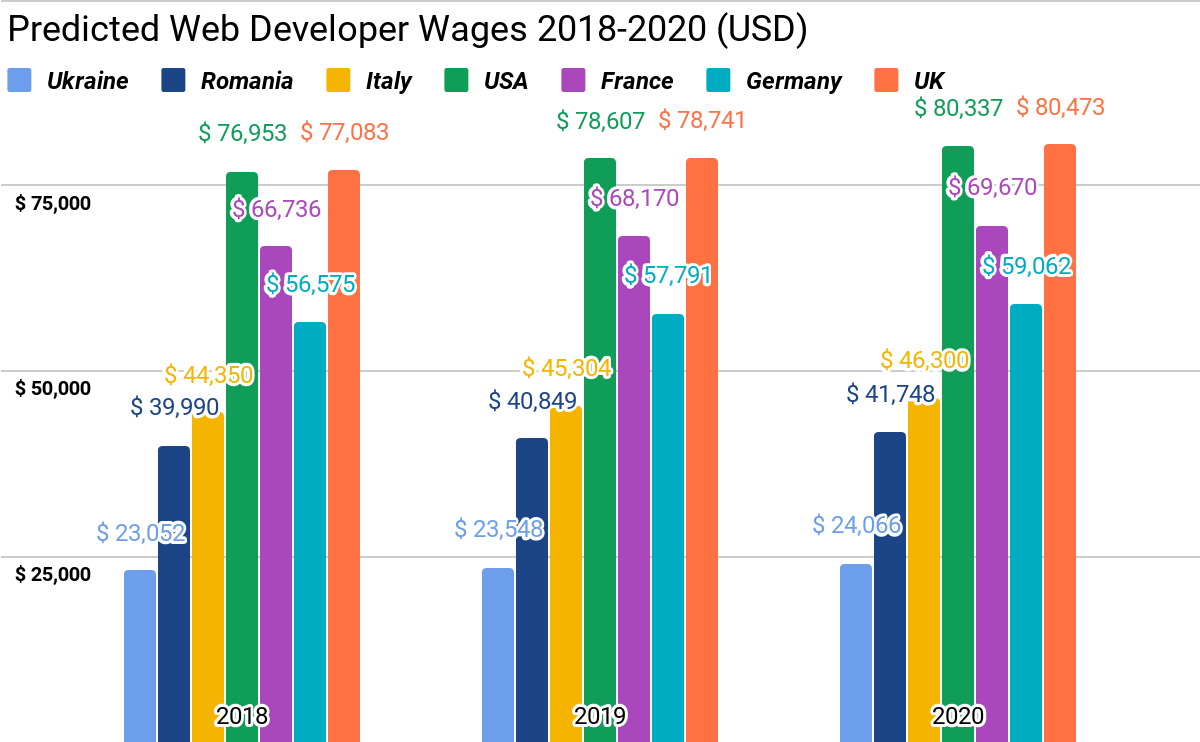 Individual countries have different wage growth rate as indicated in our chart. Ukraine, for example, had a growth rate in some web development occupations as high as 20%, according to TechEU.

The tech sector in Ukraine is one of the hottest in Europe right now, based on a TechRepublic report. We can, therefore, expect to see a lot of job growth and potentially increases in wages for web developers there. The reason why Ukrainian developers are so popular is based on the tech scene, low cost of operations, and the world-class talent. For example, the report notes that WhatsApp founder Jan Koum is Ukrainian, and many Ukrainian developers are following in his footsteps.

In its report on labor market conditions for web developers, the U.S. Bureau of Labor Statistics (BLS) paints an upbeat picture. According to the BLS, web developer jobs will grow at a rate of 13% over 10 years measured from 2016 to 2026. This growth rate is faster than most other occupations.

For employers experiencing difficulties hiring for software developers at present, this presents the need to plan carefully for the future as well. The future, if the data is anything to go by, will present new challenges for organizations on the hunt for tech talent. For example, hiring for data science talent requires going into the market early, given the scarcity of talent.

If, on the other hand, you are a developer, the data paints a rather welcome picture for the period from 2018 to 2020.

Below, we catalog the number of open jobs listed for “Web Developer” on different job sites.

Keeping in mind that, according to an NPR story, about 70% to 80% of all open jobs are not advertised, the figures become quite larger.

Meanwhile, data by the BLS estimates the total population of web developer jobs in the U.S. to be 162,900. This data, however, is only for the U.S. It is also important to note that web developers are frequently employed under related job titles such as “front-end developer”, “web page designer” and “back-end developer”.

The full list of jobs that have something to do with web development would indicate a higher population of developers. While not holding the title of “web developer”, these professionals may be found working under a variety of titles including:

Below, we chart what a 13% cumulative growth rate, given by the BLS for web developer jobs, would do to total employment in the U.S. 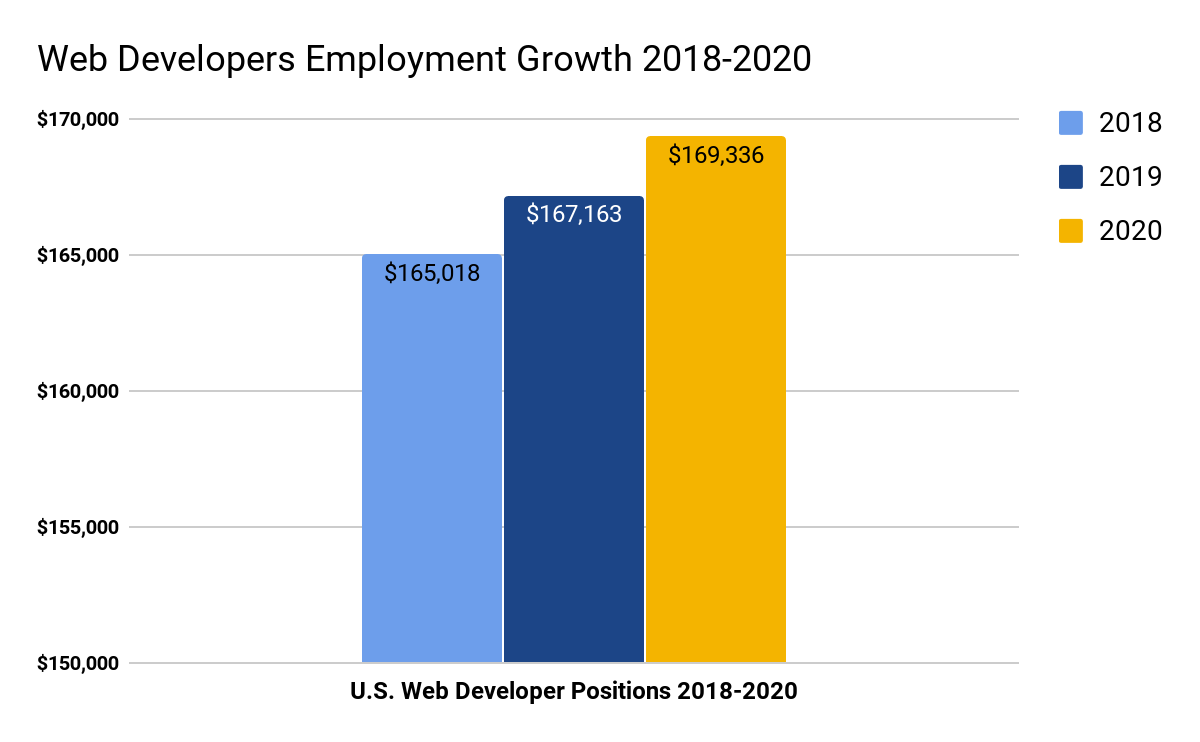 Using estimates by Evans on the total population of developers worldwide, and the U.S. share at 10% of the figure based on data by DataUSA, we can now chart the growth in jobs worldwide. Our chart assumes that developer jobs growth around the world is on par with that in the rest of the world.

Below is the chart for web developer employment in the same period looking at the whole world. 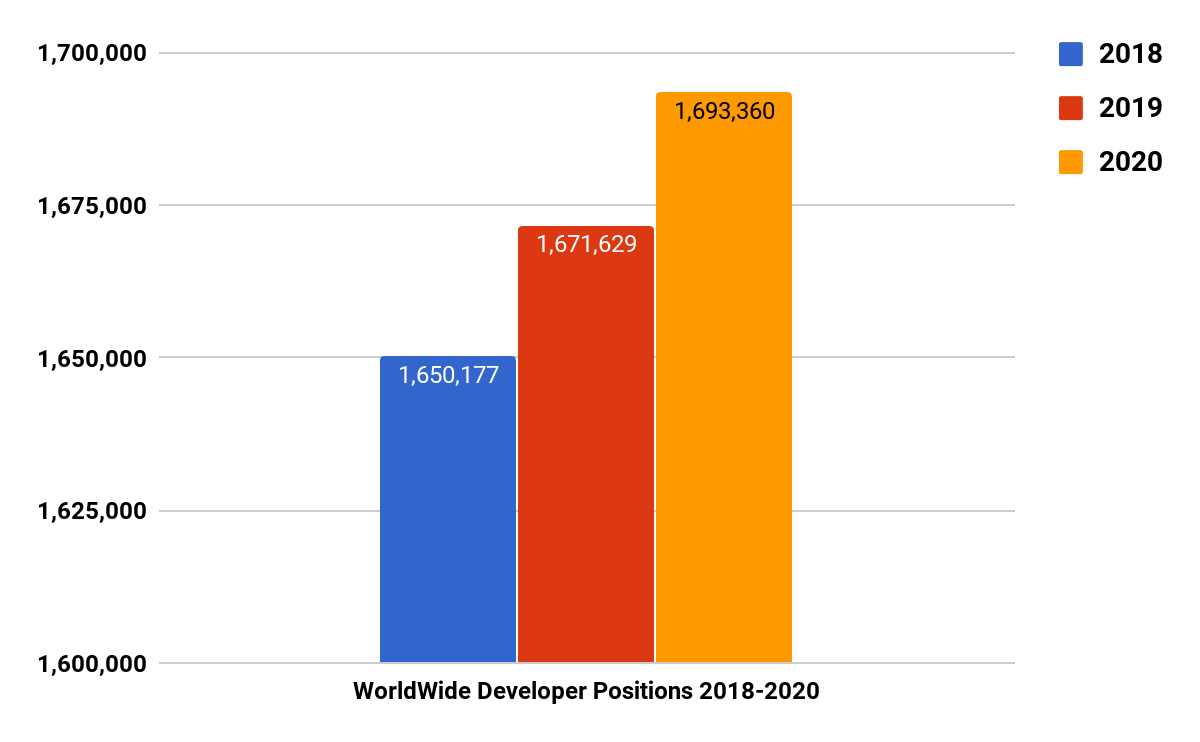 Based on data from HotFrameworks, which tracks framework popularity based on GitHub as well as StackOverflow ranking, we are able to predict the popular frameworks to 2020.

In the table above, we list the highly popular frameworks that are likely to be in highest demand based on their rankings in the preceding years. You can expect that developers specializing in these skills will be highly demanded by businesses.

Design for Web Developers. Playing the Game? Know the Rules!

A Slideshow Each Web Developer Should View to Create Richer Apps

Not a Web Developer? Begin with Fundamentals

The Monster’s Award 2022 – Winners Have Been Announced